Amber has long been a symbol of luxury and power. Humans have been using this enchanting material to make jewelry for thousands for years. It’s also known for its healing qualities. So, what is it that makes this gemstone so special? Learn more and discover the world of this time-honored jewel!

Etymology of the Yellow Stone

The English term “amber” comes from the Arabic ‘anbar (عنبر) by way of Middle Latin ambar and Middle French ambre. The Arabic word ‘anbar actually translates to the modern term “ambergris,” a waxy substance made in the intestines of a sperm whale. However, amber got its more familiar meaning during the Middle Ages.

Ancient Greeks referred to amber as elektron (ἤλεκτρον) or “formed by the Sun” due to its yellow hue. This term later became the source of the word “electricity” because friction causes dry amber to gain a static electric charge. In ancient times, amber was used to remove dust and dirt from clothing.

In ancient Greek, amber was also called lyngurium based on a belief that amber was lynx urine that hardened in the sun. It’s also possible that this term is derived from ligurium, a reference to a pre-Roman tribe known as the Ligures.

The Romans gave amber the name succinum. This comes from succus, the word for juice or any thick liquid, which is in keeping with the Roman assumption that amber was hardened tree sap.

Other languages refer to the stone’s ability to burn – such as German Bernstein, Dutch barnsteen, and Swedish bärnsten – which literally translate to “burning stone.”

Since it’s mainly found along the world’s coastlines, this yellow gemstone has earned the nickname the “gold of the sea.” 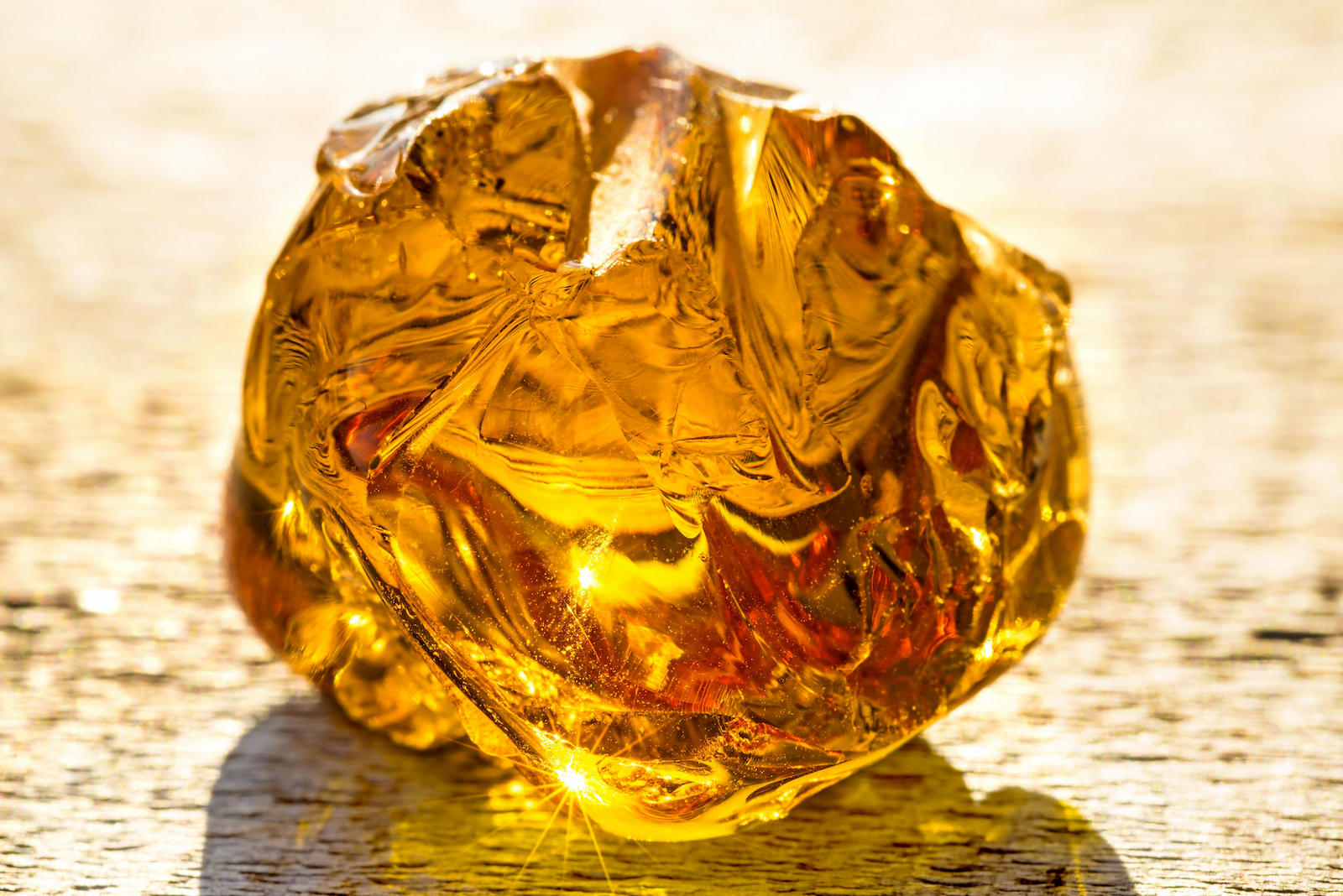 How does amber form?

Amber is the result of a process that took place millions of years ago. When a tree is injured, it creates resin to protect itself. As ancient trees died and decayed, the hardened resin still remained. It then sunk in water, was pulled down by ice, or was covered by layers of earth. The immense pressure and lack of oxygen caused the resin to harden even further as millennia passed.

Fossilized resin comes from different periods. The oldest examples are over 300 million years old. However, a majority of amber first formed some 55 million years ago during the Paleogene period.

There is also tree resin that has yet to become full-fledged amber. This is called “copal” and is only a few thousand years old.

It’s worth noting that “amber” refers to any fossilized resin that’s over one million years old. 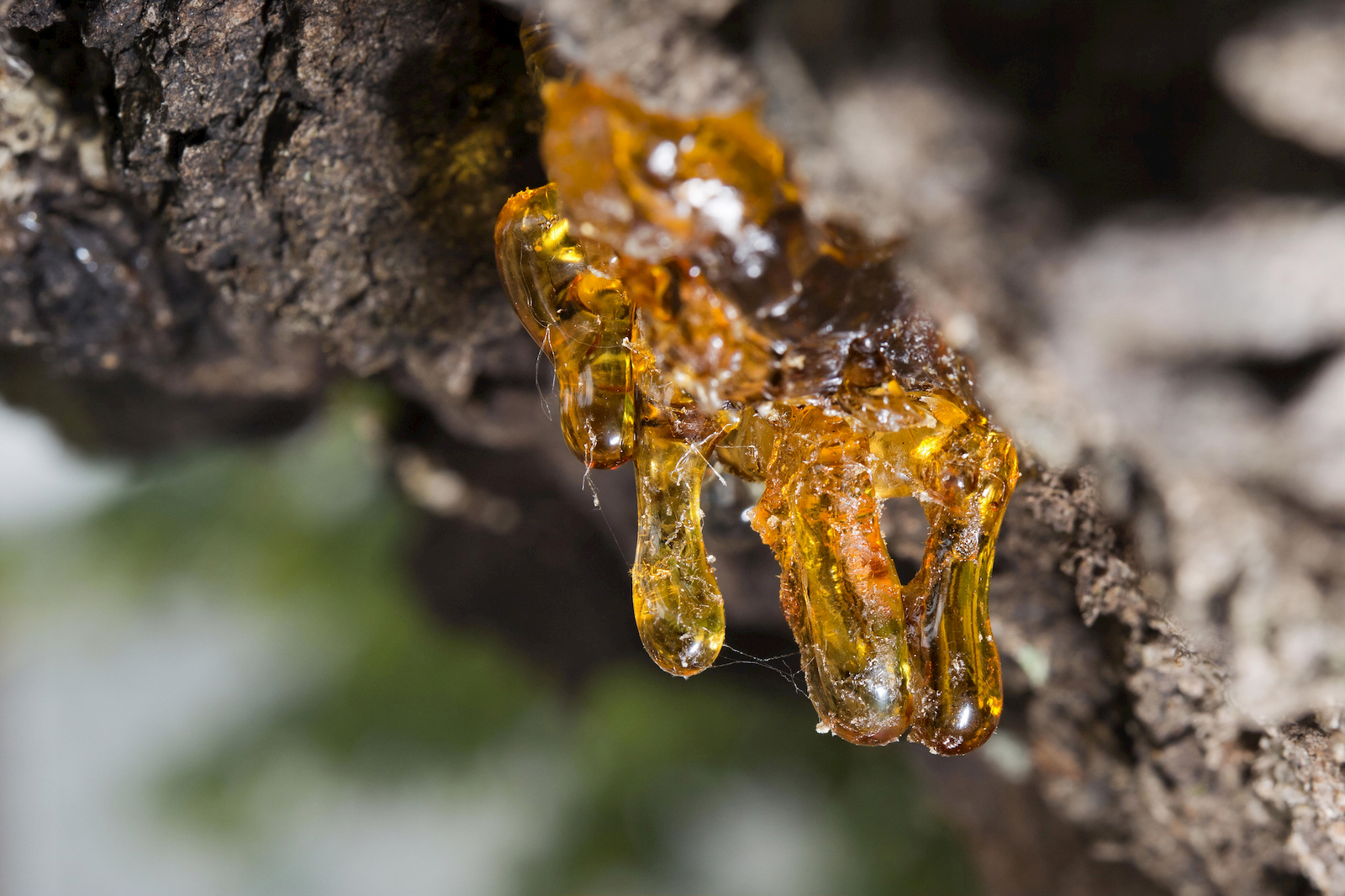 A Thing of Legend: The Amber Room

In 1716, King Frederick William I of Prussia gifted the Russian Tsar Peter the Great the famous and now notorious Amber Room. It contained over six tons of amber, which covered the walls and was used to make furniture.

Tsarina Elizabeth had the room moved to the royal family’s winter palace before relocating it to the Catherine Palace in Pushkin, just south of St. Petersburg. During the Second World War, the room was dismantled and transported to Königsberg (now Kaliningrad) for safety. Two air raids destroyed Königsberg Castle in 1944, and the Amber Room has been missing ever since. Now numerous legends and lots of speculation surround its whereabouts. 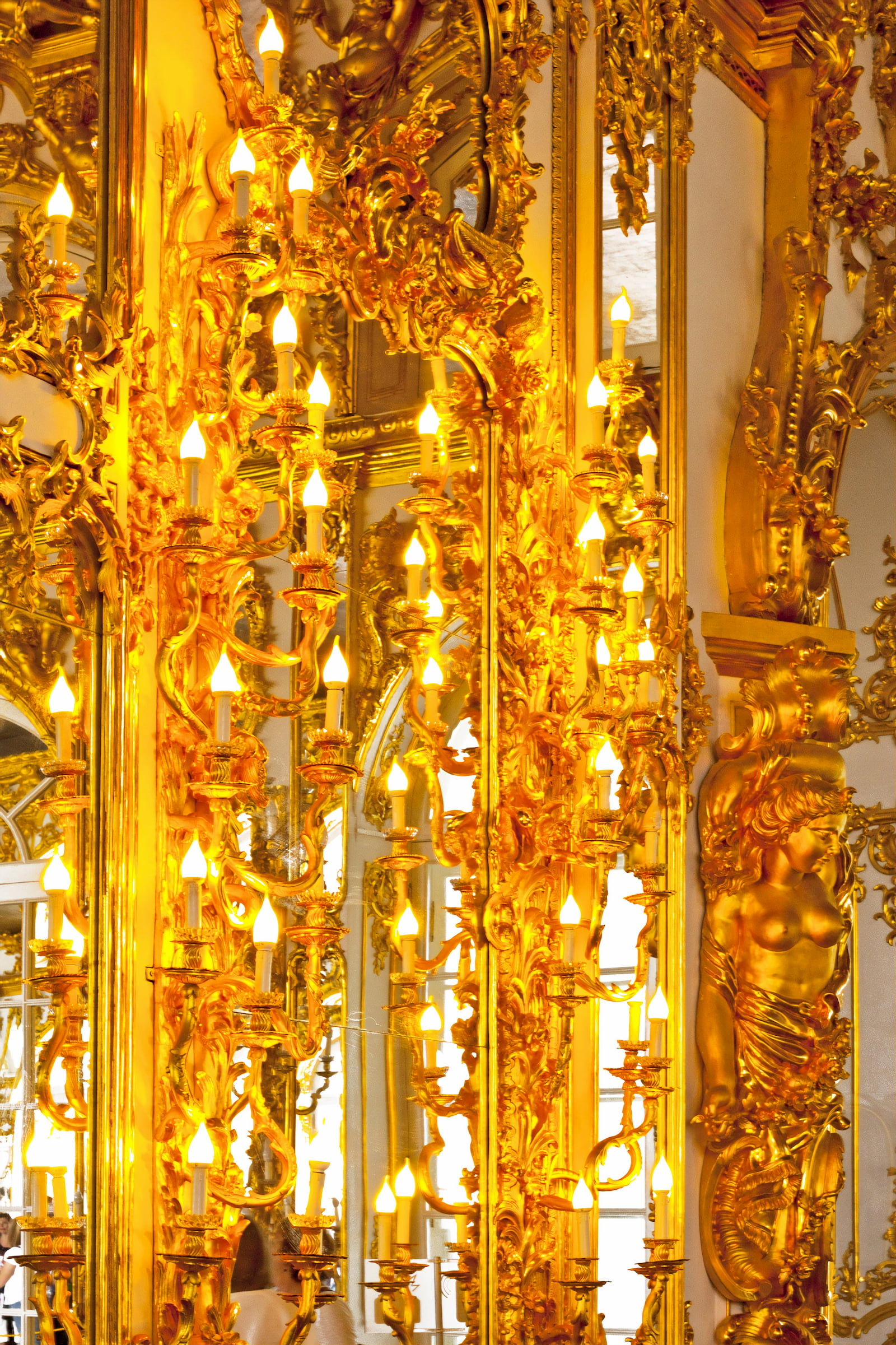 Where can you find amber?

These yellow gems wash up on coasts around the globe, apart from the polar regions. However, the majority come from the temperate regions of the Northern Hemisphere. This is due to the fact that many resin-producing trees lived and died in these areas millions of years ago.

Today, waves transport amber onto land. The highest concentrations are found on the coasts of the Baltic states, namely Latvia, Lithuania, and Estonia. Amber from this region is known as “Baltic amber.”

The list of countries with amber covers the entire planet. You’ll find fossilized resin in England, Italy, Germany, Portugal, Spain, Mexico, Canada, Japan, Lebanon, the Dominican Republic, Madagascar, and Indonesia. There are even amber deposits in the USA, the largest of which was found in Arkansas. Of the over 80 varieties of amber worldwide, the most common is succinite. It makes up the majority of Baltic amber.

On the other hand, copals tend to originate from tropical and subtropical regions like Malaysia, western and eastern Africa, New Zealand, Colombia, and Madagascar. 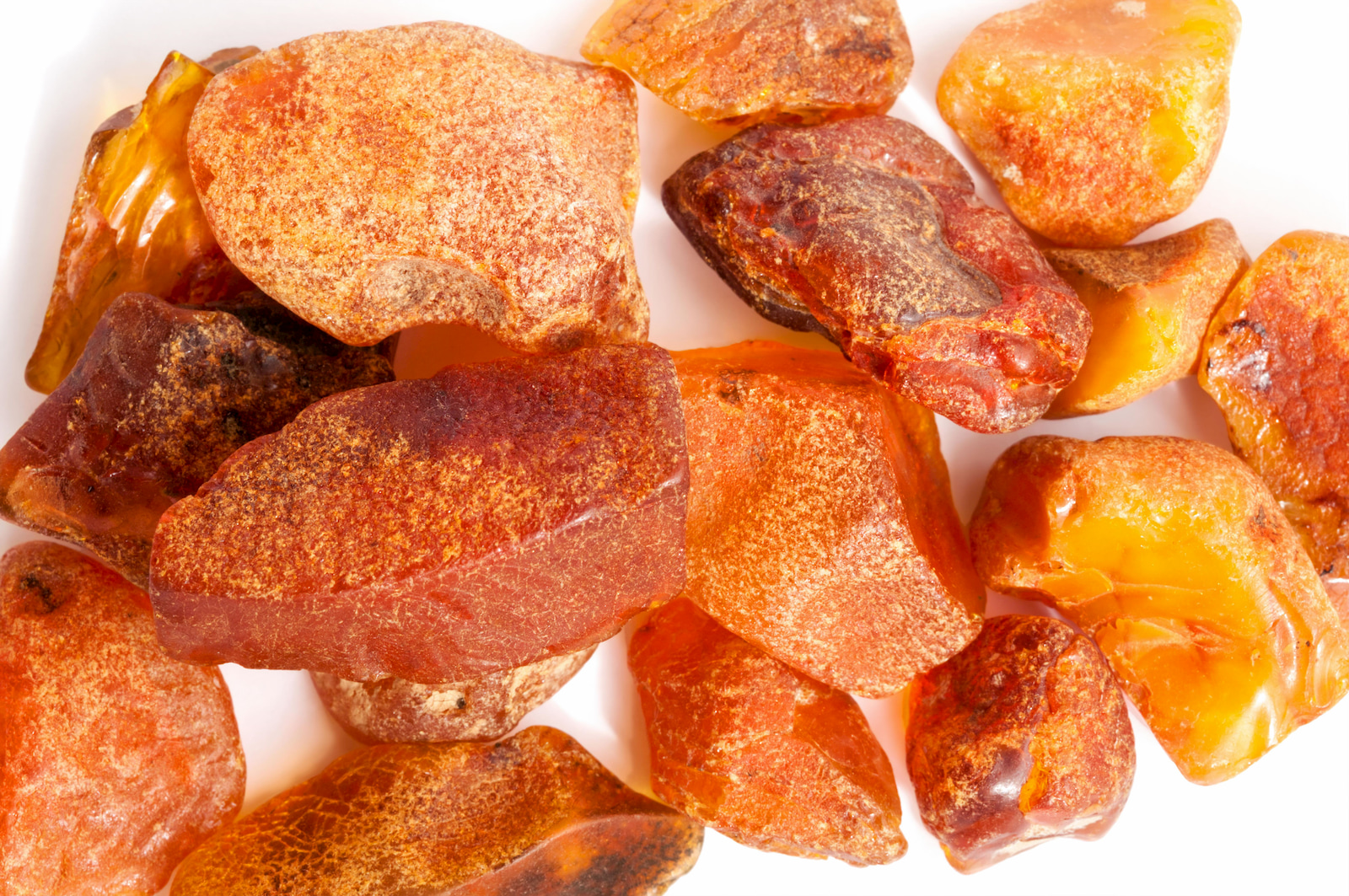 Characteristics of These Time Capsules

Fossilized resin has many defining characteristics that make each stone one of a kind and allow us to assess their quality.

A Wide Spectrum of Colors

Amber comes in a wide variety of colors: from colorless, white, light yellow, and yellowish-gold stones to different shades of red and brown. Dark brown and blackish-gray varieties exist and are extremely rare. The most common tones are yellow and brown with a honey-like shimmer. Today, “amber” is also used as a general way to define this hue.

So why are there so many different tones? Small air bubbles trapped in the resin lend some stones a milky yellow hue. Mineral deposits can result in ivory-colored amber, while organic material can cause it to appear blue. Amber that was formed inside iron-based rocks has a red appearance, and green tones come from pyrite. 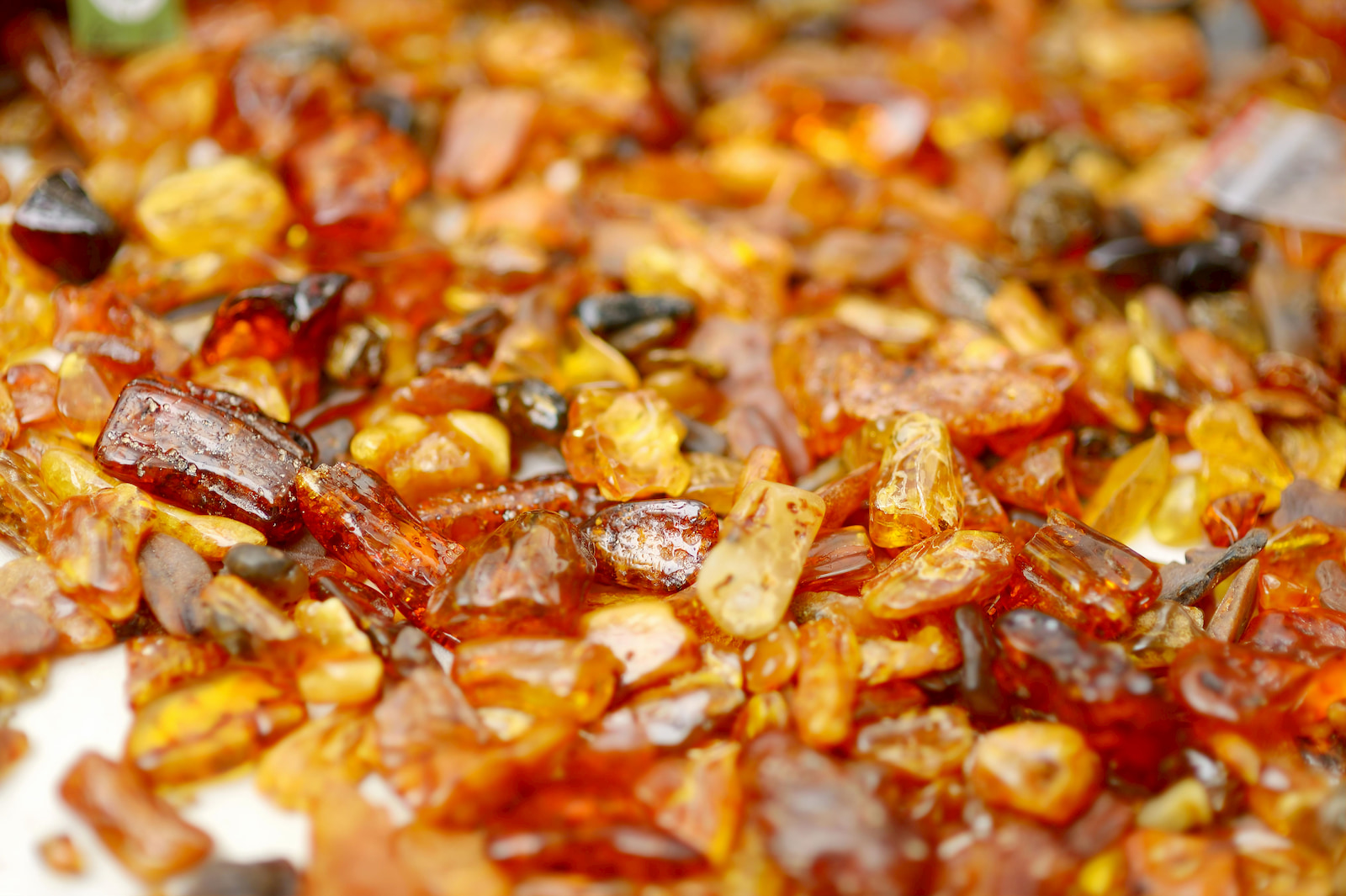 The Stone’s Size and Weight

These yellow jewels are naturally very light: One carat weighs only 0.2 grams, making it only slightly lighter and denser than water. While it sinks in fresh water, amber floats in salt water, which is why it’s most commonly found along the coast.

Amber comes in all shapes and sizes. However, most pieces are pebble-sized splinters from larger deposits. Anything much larger is extremely rare.

How amber is cut depends largely on its original shape. Only the surface will be polished. In jewelry, amber usually comes in a cabochon cut with no facets. This cut is the best way to bring out amber’s inherent shine. Amber is also commonly shaped into individual pearls to form jewelry. 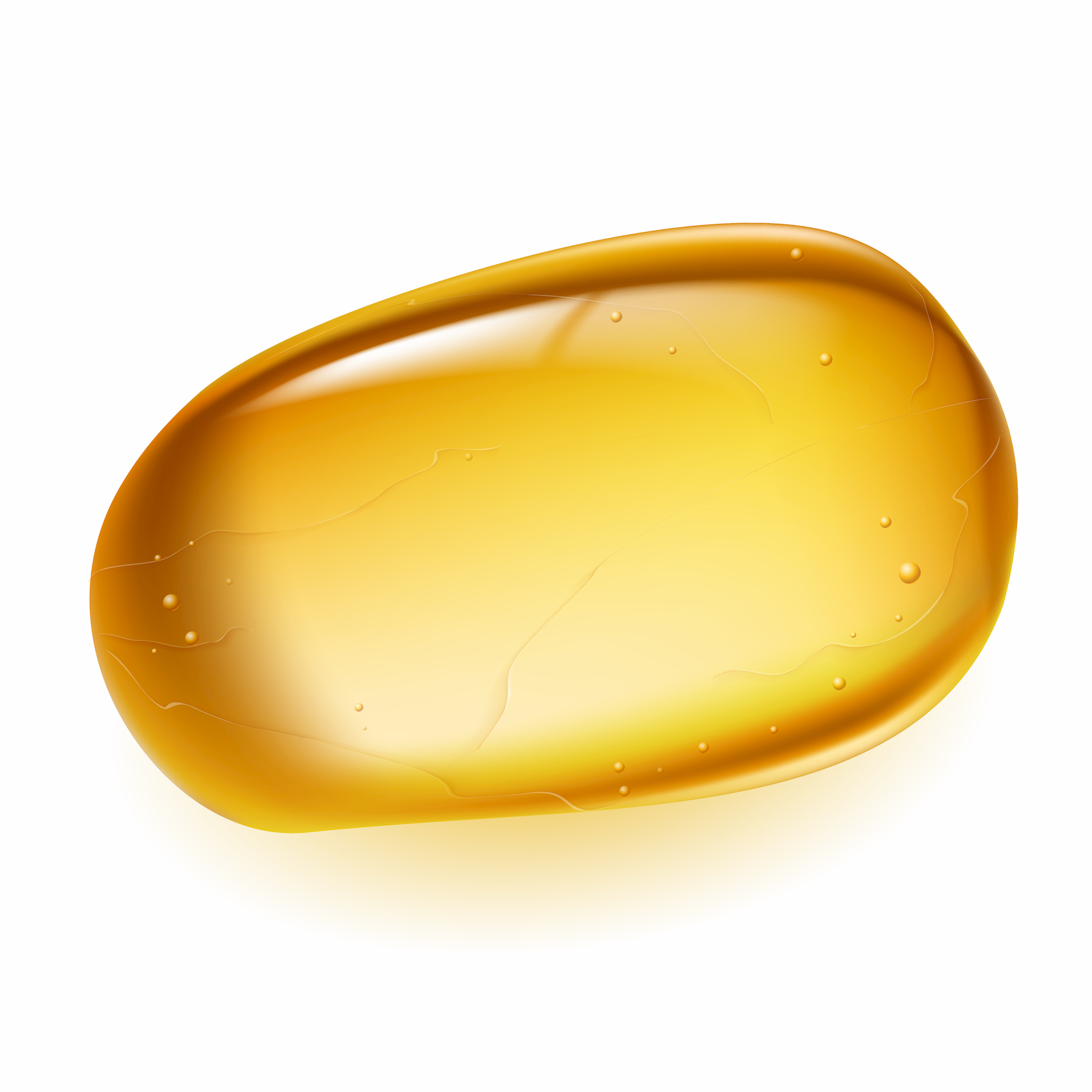 A Window into the Past

The quality of a piece of amber is usually judged by how transparent it is. Those with natural inclusions like insects or other fossils are especially highly coveted.

The resin trapped these inclusions millions of years ago and perfectly preserved them in their three-dimensional form for us to marvel at. Insects with delicate wings are especially enrapturing with their fine details.

Other types of inclusions include feathers, fur, seeds, spores, and other plant matter. There are even some extraordinarily rare examples of small lizards or scorpions trapped in resin! Regardless of the inclusion, these stones serve as time capsules of their era and give us a window into what life was like millions of years ago. 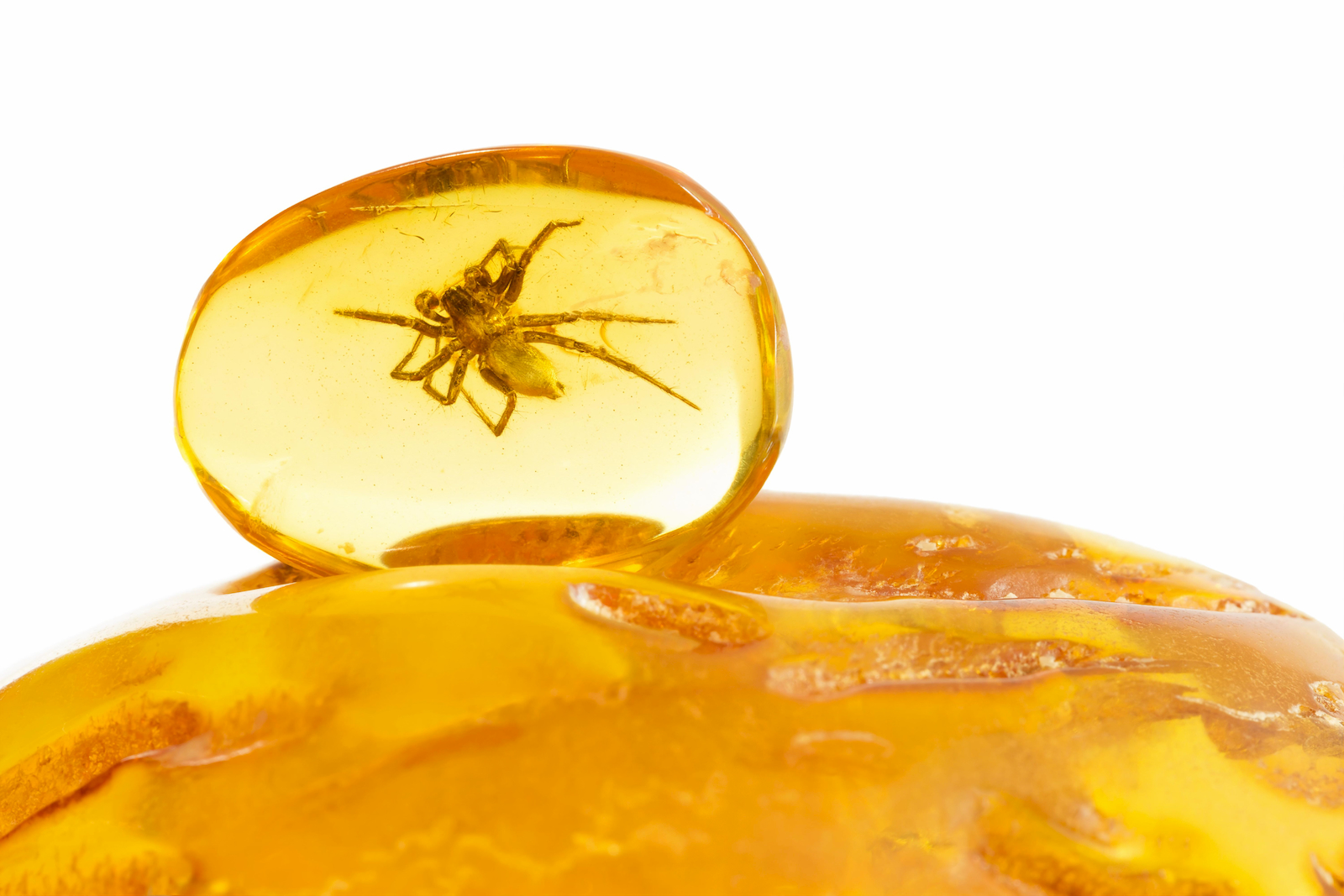 What is fossilized resin made of?

When looking at amber’s chemistry, you’ll find it’s a non-uniform mix of elements. Carbon accounts for between 67-81% of amber’s chemical makeup. The rest is hydrogen and oxygen, though some rare pieces contain up to 1% sulfur. Other minerals can get absorbed by the resin and also contribute to its chemistry.

Baltic amber is relatively soft, with a rating of 2 to 2.5 on the Mohs scale of mineral hardness. This means it’s easy to scratch or damage the surface. In fact, even though amber is neither a mineral or rock, we still regard it as a gemstone because of its various other properties.

Other varieties, such as brown amber, are much harder and less susceptible to scratches. Goitschite, bitterfeldite, and copal are even softer than succinite (Baltic amber) and have a rubber-like consistency that falls between the gumminess of fresh resin and the hardness of amber.

Today, “pressed amber” dominates the market. It’s made from tiny scraps of amber that are cleaned, heated, and pressed together to form a bigger piece.

The different types of succinite amber can be broken down by their clarity: 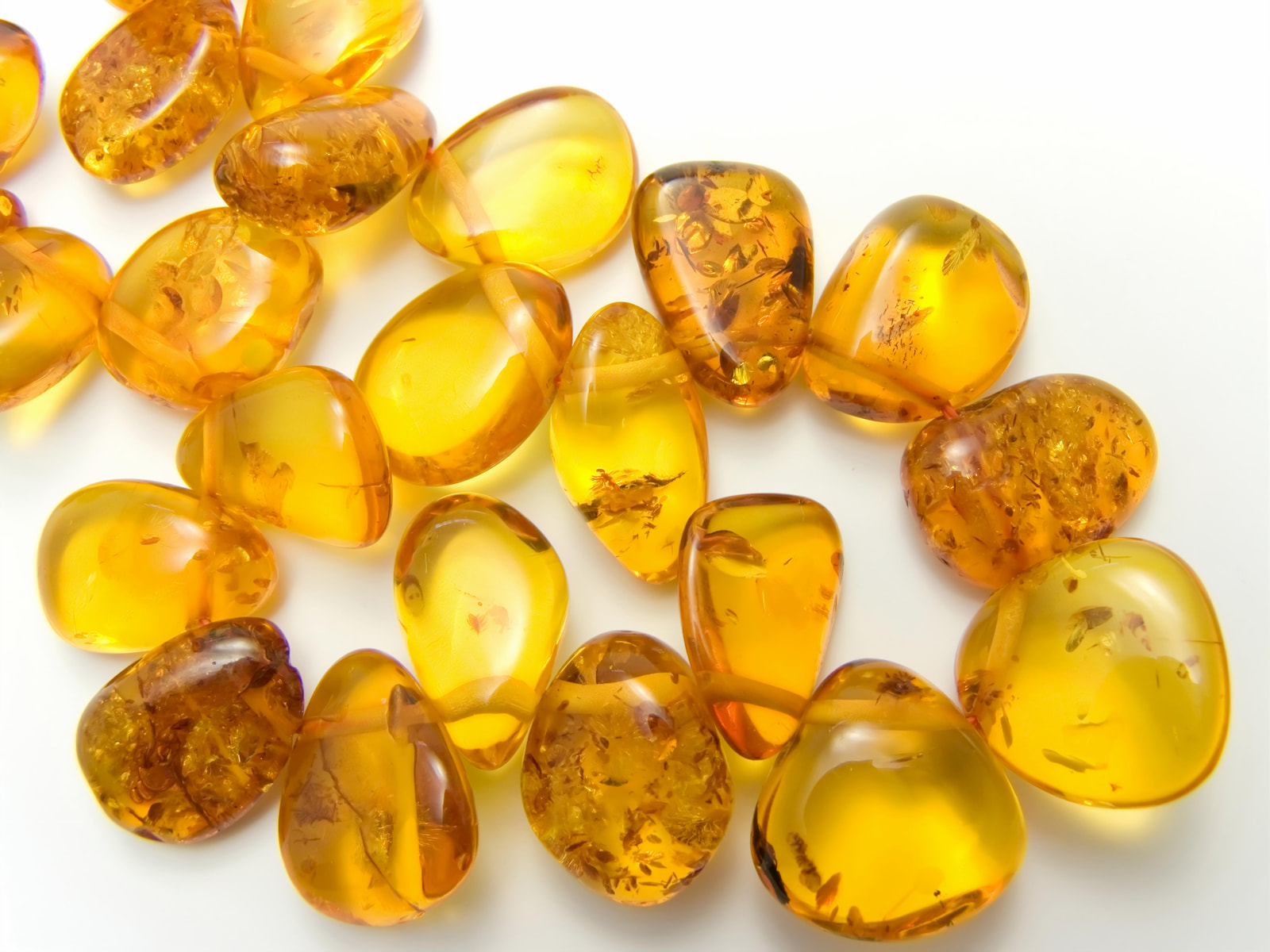 What is amber’s natural shape?

Amber has a primary and secondary natural shape. The primary shape is the one the resin took as it flowed out of the tree. In some instances, it maintains this form as it hardens into amber. Shapes include drops, cones, slabs, and nodules.

The secondary natural shape is the result of weathering and the various stresses resulting from the resin’s interactions with water, ice, and earth. These pieces often have relatively smooth surfaces.

How can I recognize amber?

If you’re not sure whether or not you’re looking at amber, we’ve created a short overview to make it easier. Amber has the following characteristics: 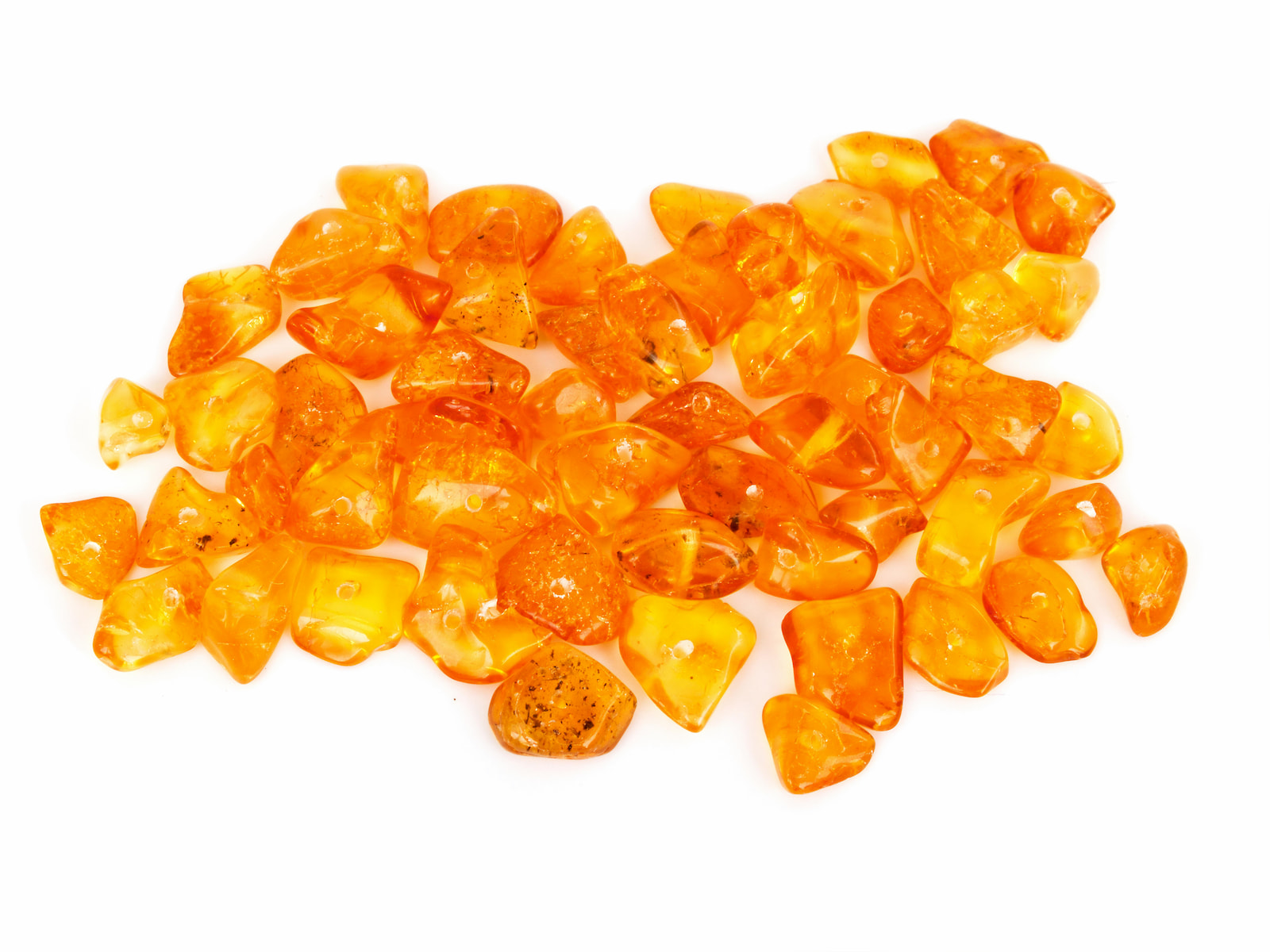 The Effects and Meaning of The Yellow Jewel

Amber is more than just pretty to look at. Many people claim it has healing properties. It’s believed it can relieve pain and promote a sense of calm.

Amber’s Influence on the Body

As a healing crystal, amber promotes pain relief and has a positive effect on the overall healing process. It’s most commonly used to address issues with the digestive tract, gallbladder and liver ailments, and kidney and bladder problems. Thanks to its fever-reducing and anti-inflammatory properties, it’s said to work wonders combating gout and rheumatism.

It’s alleged that amber can awaken the spirit, bring feelings of happiness and contentment, and encourage mental stability. It opens new paths to strength and courage and surrounds people with positive energy.

If you place it under your pillow, it’s supposed to lead to more restful sleep. Amber is also said to keep away evil and warn of impending danger.

Couples celebrate their “amber anniversary” after 34 years of marriage. Just as the stone contains various inclusions and imperfections, couples who have been together that long have certainly experienced their fair share of ups and downs. What could be better to honor this special day than a piece of amber jewelry? 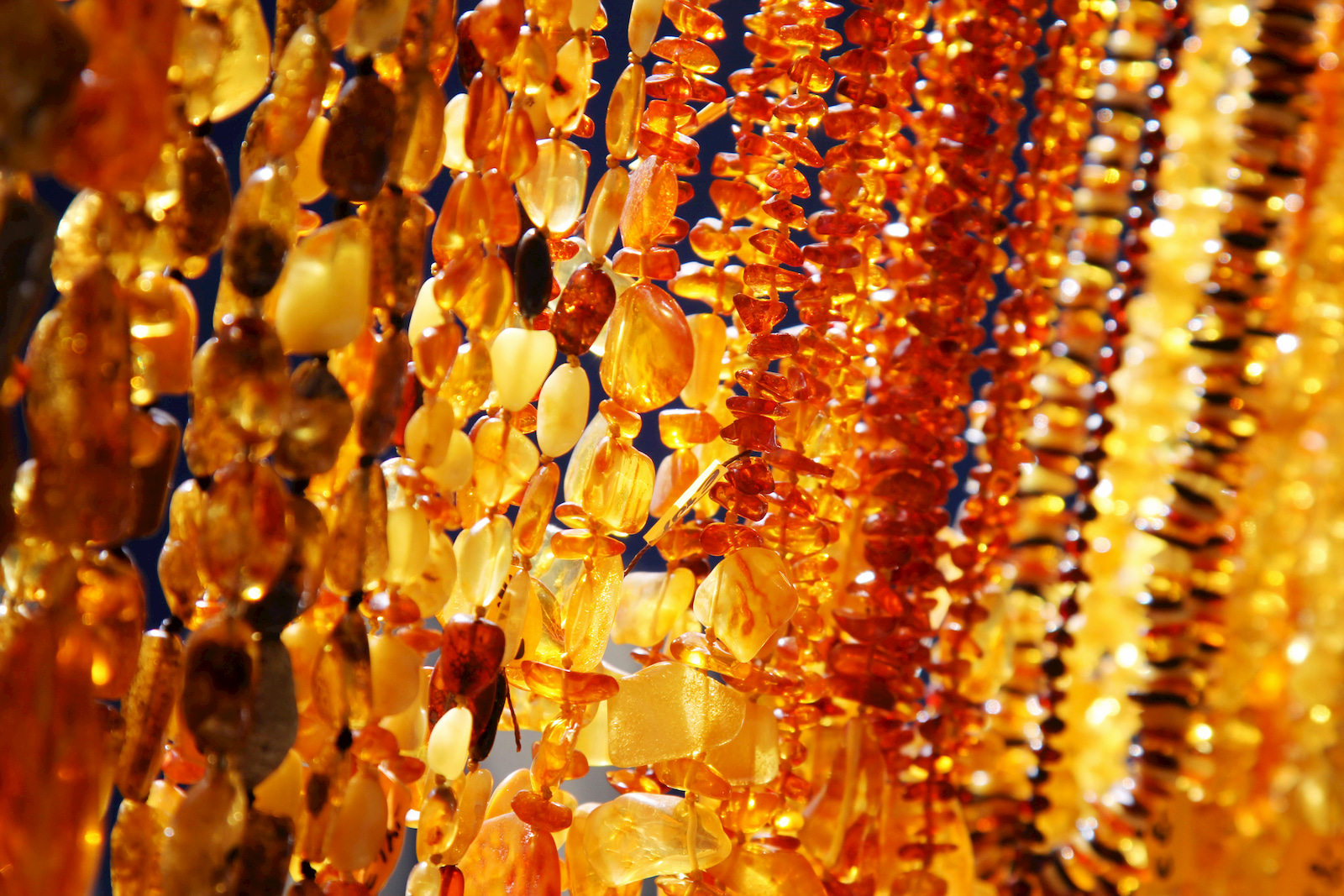 How much does amber cost?

Amber is hard to put a price tag on since every piece is so unique. Like other gemstones, it depends on its quality, which is based on a set of criteria. These include color, intensity, mass, and density.

Brown amber is much more common than yellow amber and, therefore, more affordable. Smaller stones are also more abundant than larger pieces, which is why the latter are more expensive.

Clarity is also an important factor, the exception being amber with inclusions like spiders, larvae, leaves, beetles, or grasshoppers. Such stones are much more valuable than those without inclusions.

The demand for amber has skyrocketed in recent years, causing prices for both raw and processed amber to increase significantly.

Amber’s vivid color is what makes it one of the most coveted gemstones. Women have long treasured amber necklaces as a symbol of luxury and power.

On FineJewels24, you’ll find numerous exciting amber creations. Dive into the world of this honey-yellow jewel and discover your perfect piece of amber jewelry! 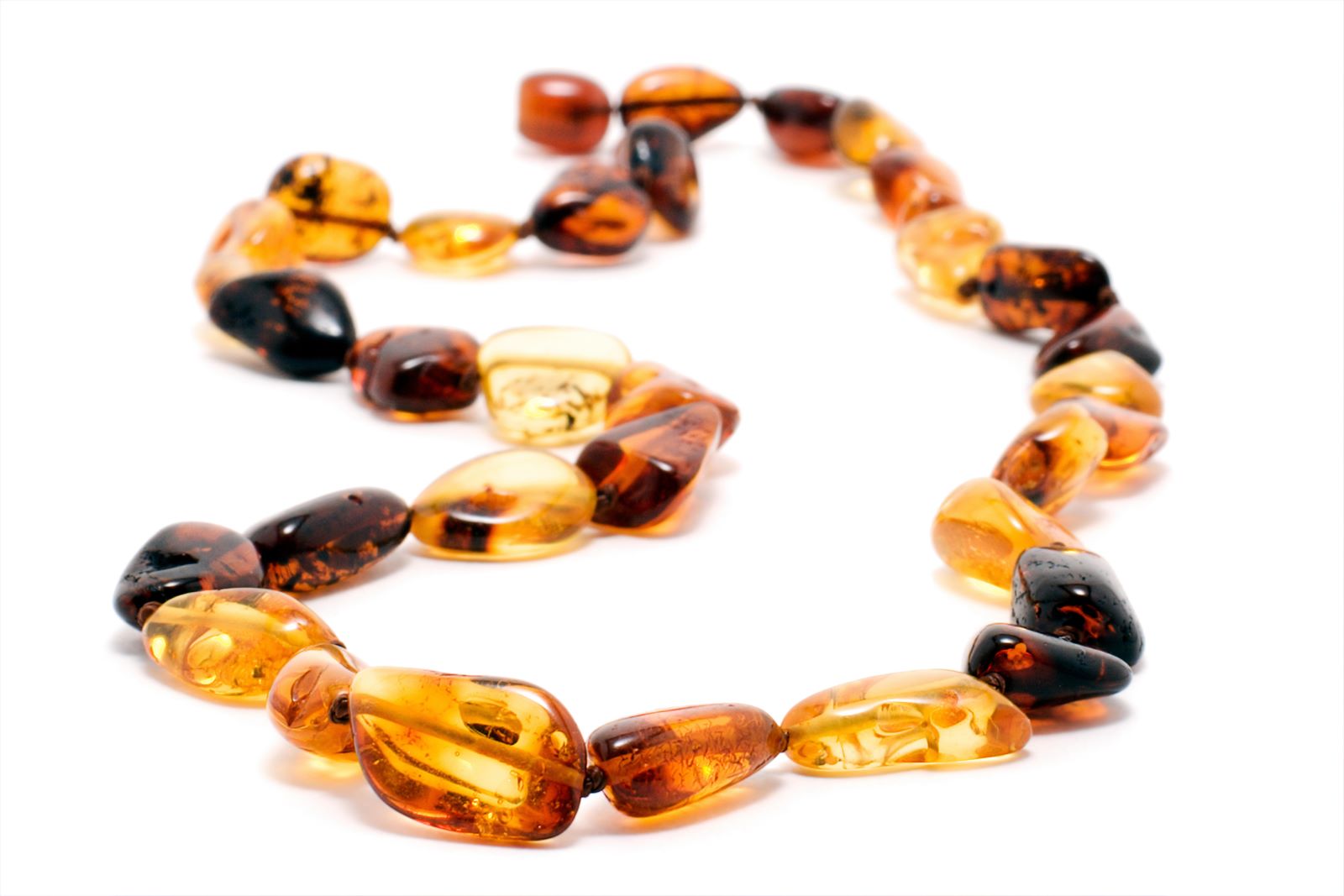