Emeralds are the most valuable of all green gemstones. In fact, they are among the most popular precious gems, alongside rubies and diamonds. Many cultures assign emeralds great importance. But what is it that makes these gemstones so unique? Read on to learn more about this fascinating jewel!

The Etymology of Emerald

The term “emerald” comes from Vulgar Latin esmaralda/esmaraldus. In standard Latin, this stone was referred to as smaragdus, itself derived from Ancient Greek smáragdos or “green gem.” The word emeraude would later enter Middle English via Old French esmeraude. Eventually, this would develop into the term we know and use today.

A Green Jewel with an Impressive History

Emeralds have biblical connections. You’ll find this precious stone mentioned in the Book of Revelations as the fourth of twelve foundation stones used in Jerusalem’s city wall.

However, emeralds were also coveted in pre-biblical times. There are confirmed accounts of ancient Egyptians mining emeralds as far back as the 13th century BC. Some even claim emerald mining began over two millennia earlier than that. Whatever the case, the mines at Sikait and Sabara spent thousands of years as the main source of this stunning gem for Europe and numerous empires, from Rome and Byzantium to the Islamic conquerors of the 7th and 8th centuries.

Cleopatra herself was a fan of this sparkling stone. Egypt’s last true pharaoh wore emerald-studded jewelry and even gave out emeralds engraved with her likeness as gifts.

These green stones were also popular across the Ottoman Empire, Persia, and India. In the 1500s, Spanish conquistadors discovered emeralds being traded along indigenous routes that stretched as far as modern-day Chile and Mexico. This quickly led to the Muzo mines of Spanish-conquered Colombia replacing Egypt as the world’s preeminent source of emeralds.

Numerous companies lay claim to creating the world’s first synthetic emerald. However, the first commercial products appeared in Austria in the 1960s. At the time, these stones were called “Emerita” and “Symeralds.” 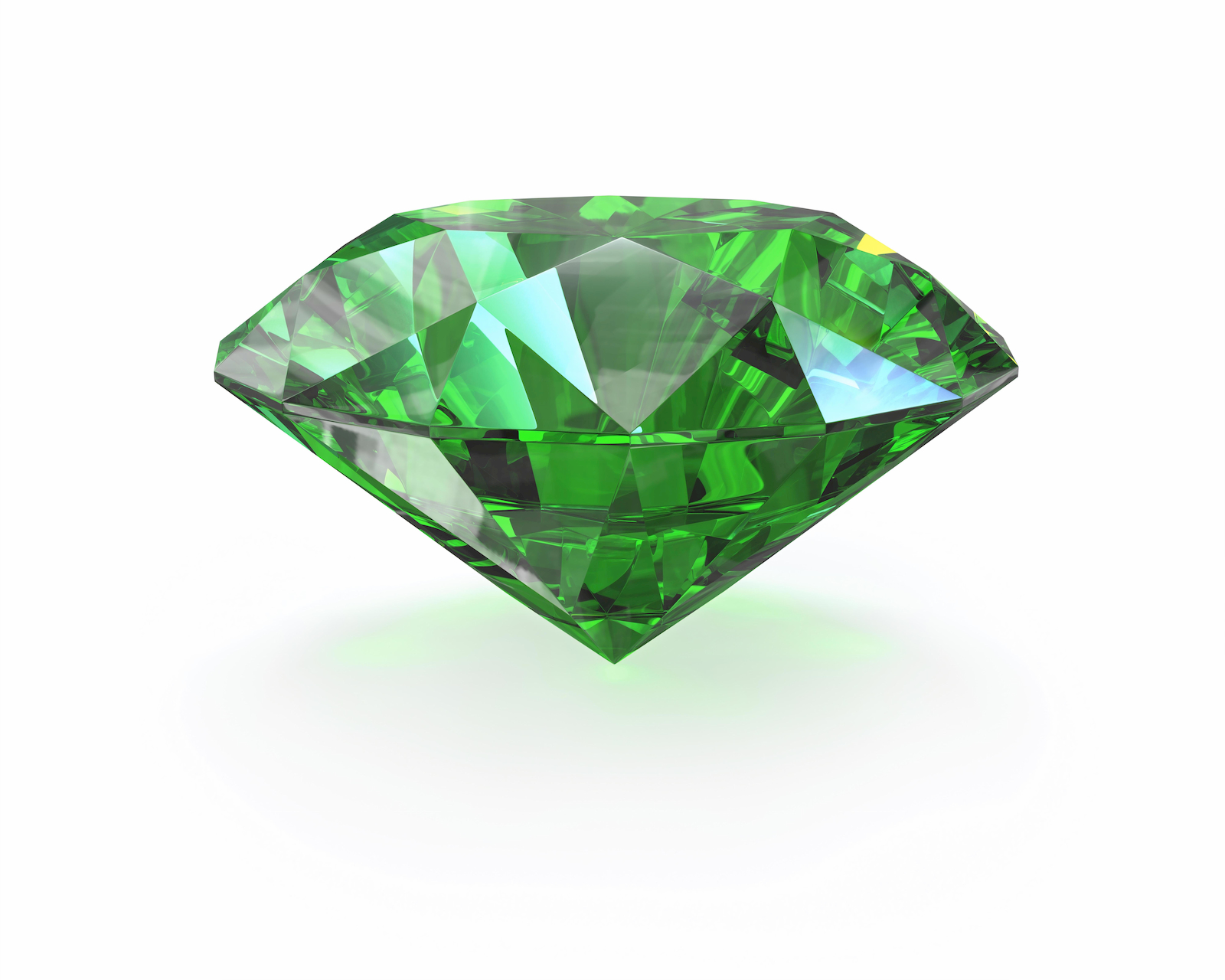 Where do emeralds naturally occur?

Emeralds always occur in beryl, an extremely rare mineral. As a result, you’ll often find these stones in beryllium-rich granites or pegmatites. Another possible site to look for emeralds is within schists. However, in Colombia, home of the world’s largest emerald deposits, these green gems exclusively appear in black shale and limestone ores at around 150 locations. Every year, this South American country produces 55% of all new emeralds, which pumps between $150 million and $400 million into their economy.

Other notable emerald-producing countries include Brazil, Zambia, Zimbabwe, and South Africa. In these countries, the mining and export of this precious stone play a significant economic role.

Did you know that one of the largest emeralds ever found was discovered in the Brazilian state of Bahia in 2011? The so-called “Bahia Emerald” contains what’s thought to be the world’s largest single emerald shard and weighs around 752 lb (341 kg).

What makes a good emerald?

As with all precious gems, emeralds are graded according to the 4Cs: color, clarity, cut, and carat. The most important quality factor for any emerald is its color. While all emeralds are green, they vary in shade from very light to very dark. Vivid, “emerald green” stones are considered ideal. Unlike diamonds, an emerald’s clarity is judged using the naked eye. If no inclusions or fissures are detected, it is considered flawless. However, compared to other stones, such “flaws” have a much smaller effect on the price.

Emeralds fall between 7.5 and 8 on the Mohs scale of mineral hardness, making them rather difficult to work with. While some natural crystals can be quite large, they are usually shaven down to only a few centimeters across before they are ready to be cut and set in a piece of jewelry. 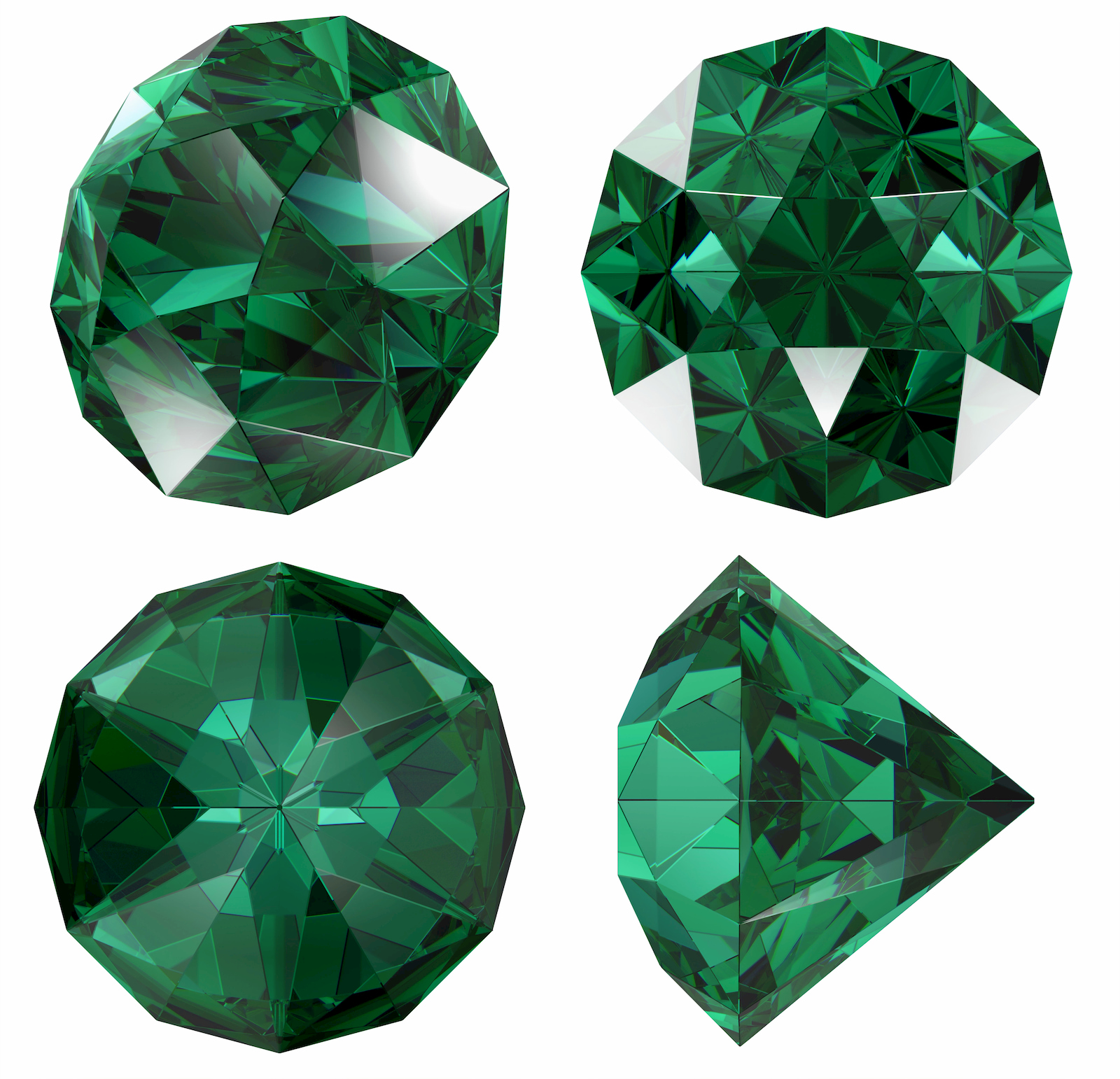 What ingredients go into making an emerald?

Emeralds are the most valuable of all beryl minerals. Other beryls include aquamarines, heliodor, morganite, red beryl, gold beryl, goshenite, and vanadium beryl.

Each stone gets its color from different elements. In the case of emeralds, it’s chromium or vanadium. 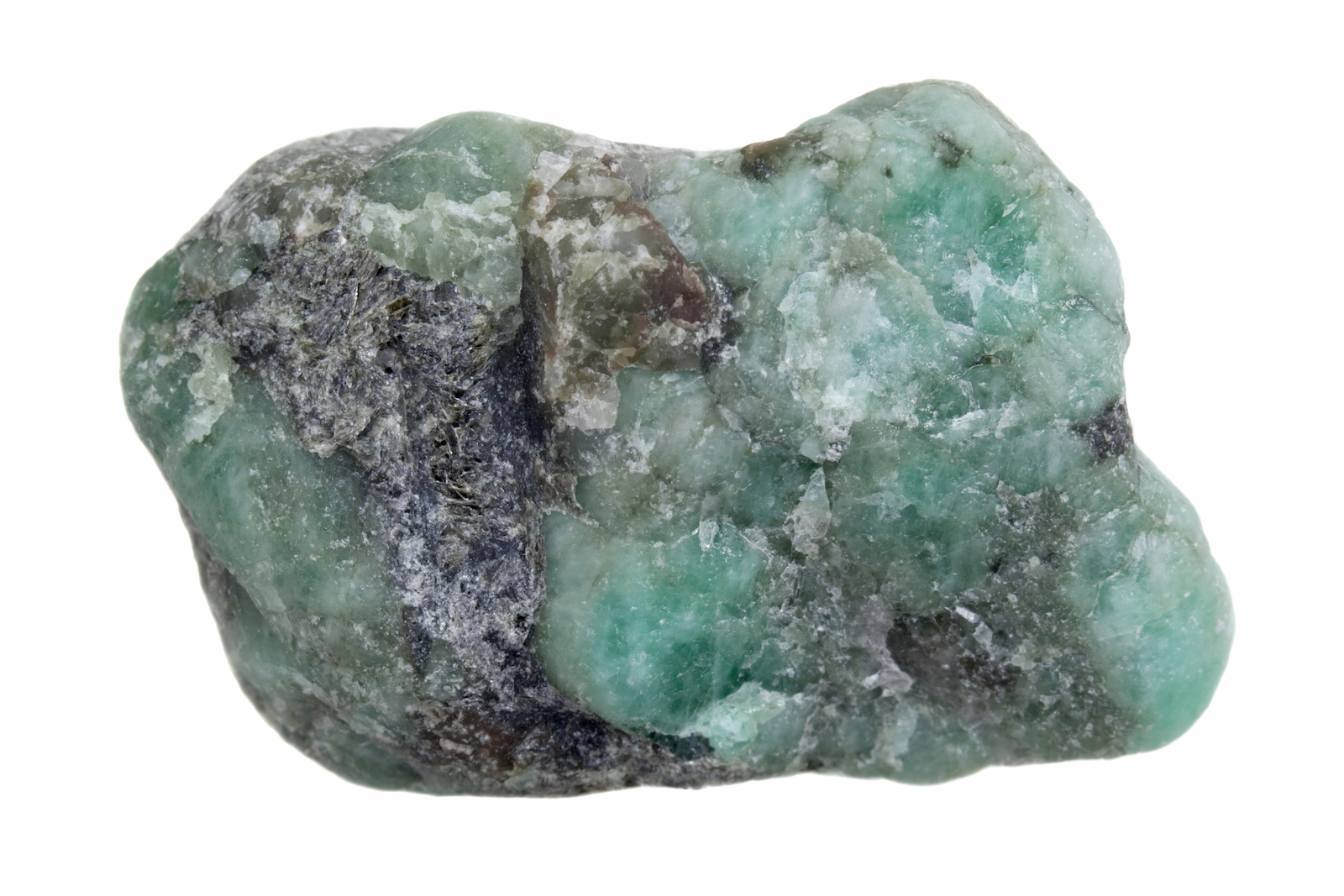 One of the most popular emerald varieties also happens to be among the rarest: the trapiche emerald. These gems are only found in Colombia and are defined by six radial, spoke-like inclusions. Trapiche emeralds can be transparent or opaque and vary in color from light to dark green.

What makes trapiche emeralds truly special is that they form naturally and are not the result of creative cutting.

Another interesting emerald variety is the chatoyant (or cat’s eye) emerald. These stones have a series of very thin parallel inclusions. Light reflects off these inclusions to form an opaque band. Cat’s-eye emeralds are extremely rare and highly coveted.

How much do emeralds cost?

The price of an emerald is determined according to the 4Cs: color, clarity, cut, and carat weight.

The most important of these four factors is color. Gems with a saturated emerald green tone are much more expensive than those with a lighter green hue. An emerald’s price can range anywhere from a few dollars to tens of thousands of dollars or more per carat. While heirloom/rare emeralds are the most expensive, more common emerald grades include:

While less important than color, brilliance also plays a major role in an emerald’s value. The combination of a deep green hue and the right cut for optimal brilliance results in the most highly coveted gems.

Inclusions and fissures are not as detrimental to an emerald’s value as they are in other gemstones. If they’re not too distracting, they’ll generally have little to no effect on the price. In fact, the unique pattern of inclusions is sometimes referred to as their “jardin,” or garden.

Unsurprisingly, the most popular cut for an emerald is the emerald cut. This eight-sided step cut generally gets the best out of the green stone. The better the cut, the more expensive the emerald. Stones that are cut for weight are of low quality and don’t optimize the emerald’s brilliance.

Our tip: Always compare the price per carat! 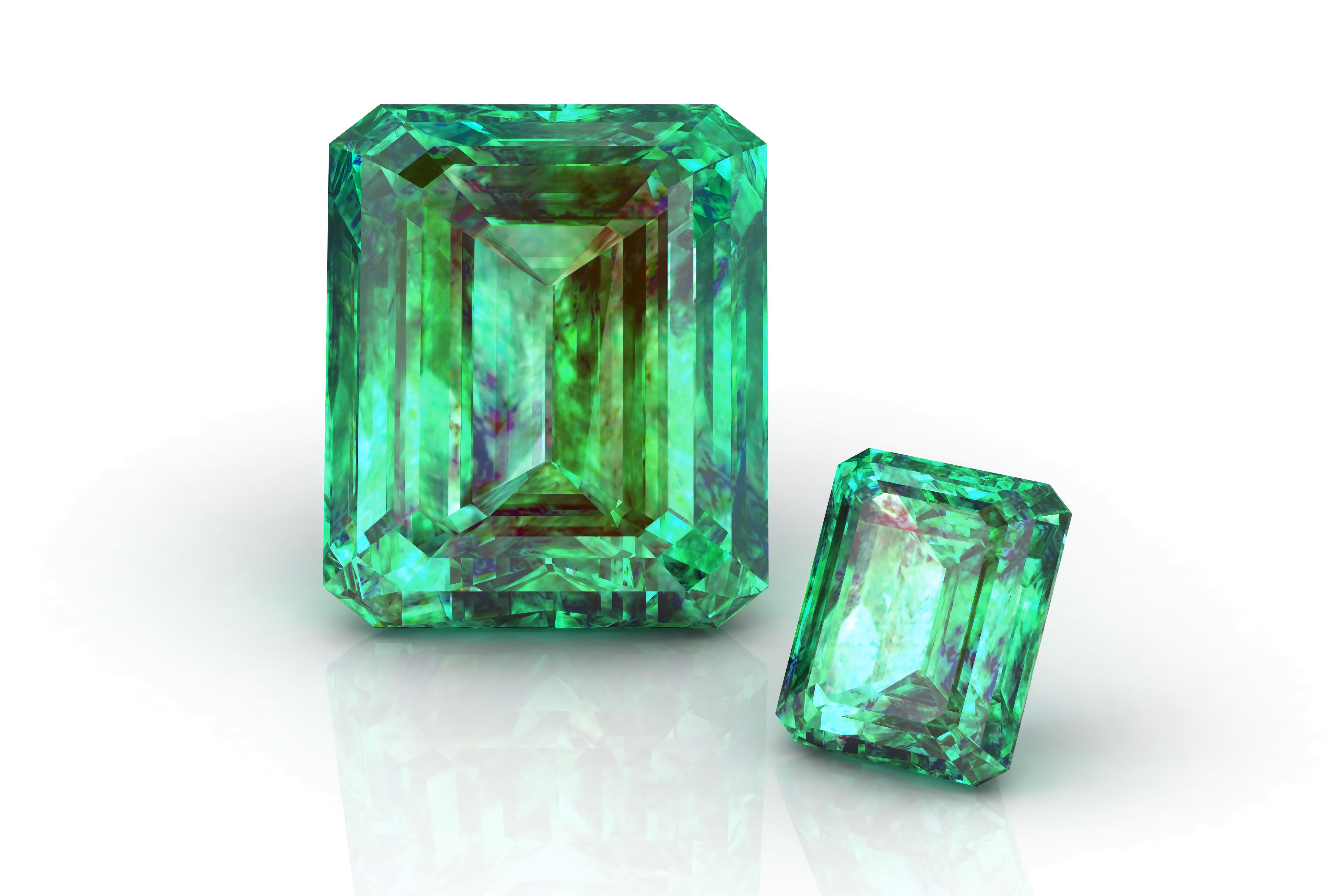 Beware of Treated and Imitation Stones

Since emeralds are so valuable, many people try to treat heavily-flawed stones or even pass off other materials as emerald. Natural fissures and inclusions are sometimes filled with oils or polymers to hide their presence. Treated stones are less valuable than their natural counterparts. Other stones that are sometimes mistaken for or falsely advertised as emeralds include green tourmalines, dioptases, demantoids, and green grossular. There have even been instances of stained glass being marketed as emeralds.

The Effects and Symbolism of this Famous Gem

Emeralds are admired not only for their economic value but also for their healing properties. They’re said to have a positive effect on emotions and the soul. To unleash the stone’s potential, it should be removed from any setting, cleaned, and allowed to charge in the sun.

According to some, emeralds activate the body’s self-healing powers and can remove many toxins thanks to the presence of chromium. You can allegedly even use this stone to combat childhood illnesses, back pain, and vision problems. Other ailments emeralds can help treat include high blood pressure, insomnia, swelling, inflammation, and general aches and pains.

Effects on Emotions and the Soul

Emeralds are considered a symbol of beauty, justice, harmony, and peace. Wearing emeralds is said to bring clarity and balance to the soul, free you of prejudice, and encourage optimism. People who don this gem are alleged to spread joy and warmth to their surroundings, reject injustice, and gain the ability of foresight.

This stone can also be used to address problems related to nervousness, stagnation, unrest, and aggressiveness. Some claim it has a positive effect on one’s serenity, discipline, autonomy, love of life, and creativity.

Emerald is the birthstone for May and is also an important gem for the zodiac sign Cancer. What’s more, emeralds are traditionally given as a gift on a couple’s 55th wedding anniversary. What could be more fitting that this symbol of harmony, joy, and happiness? 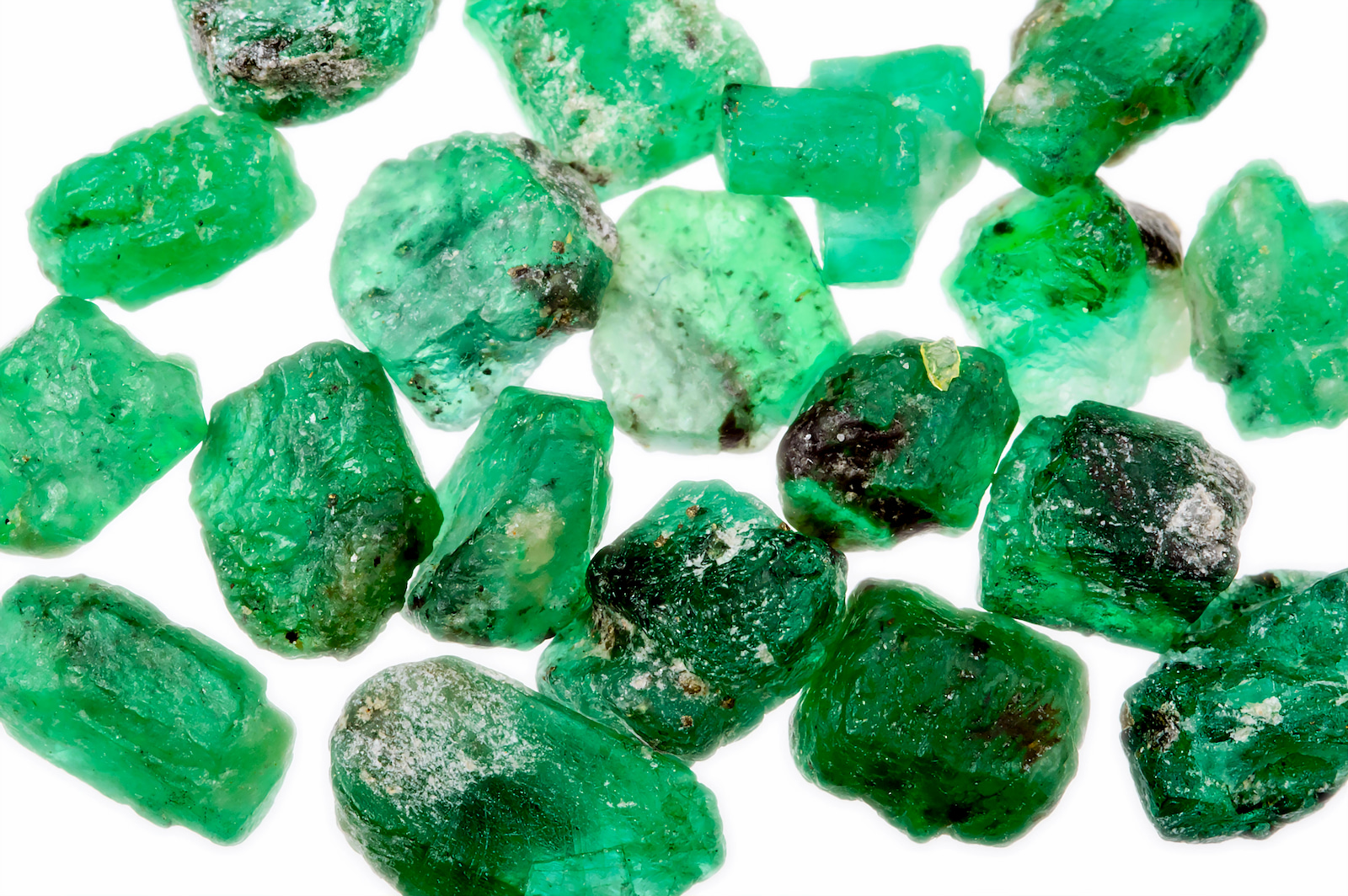 Thanks to their unique, intense color, emeralds are extremely highly coveted. Their grace and refined sparkle have been captivating humans for millennia.

On our online marketplace, FineJewels24, you’ll find a wide array of extraordinary emerald-studded creations. Dive into the world of this fascinating green jewel and explore our emerald jewelry!