Jade is one of the most impressive precious stones thanks to its cultural, historical, and symbolic significance as well as its purported healing qualities. This green jewels is also popular in jewelry making. In fact, some cultures consider it more valuable than gold, which is why this stone is sometimes referred to as “green gold.”

So, where does the word “jade” come from and what makes this stone so special? Read on to learn more about this fascinating gem!

Etymology of the green gem stone

The term “jade” can trace its origins to the mid-1500s when Spain conquered Central and South America. Conquistadors noticed native populations using the mineral to treat ailments in their loins. As a result, they named the stone piedra de ijada or “stone of the loins.” This word later entered the French language as l’ejade, eventually being adopted into English as “jade.”

While the mineral jadeite can trace its linguistic roots back to the Spanish term, the mineral nephrite gets its name from the Latin term lapis nephriticus. This translates to “kidney stone,” as other cultures believed jade could cure kidney problems.

Jade and nephrite were once thought to be synonyms that referred to the same mineral, as the different varieties are quite difficult to tell apart. It was later realized that “jade” is actually a group of two distinct minerals: jadeite and nephrite. Today, the term “jade” is used as a general term for both types of stone.

The Chinese term yù has a number of English translations, one of which is “jade.” Jadeite and nephrite are more specifically known as zhēnyù or “true jade” to help distinguish them from the other minerals that are also signified by the word yù. In ancient China, jade was often called “the stone of Heaven” and was thought to be a connection between Heaven and Earth.

Other green minerals, including serpentinite and noble serpentinite, are sometimes marketed as “new jade” even though they do not belong to the jade group. 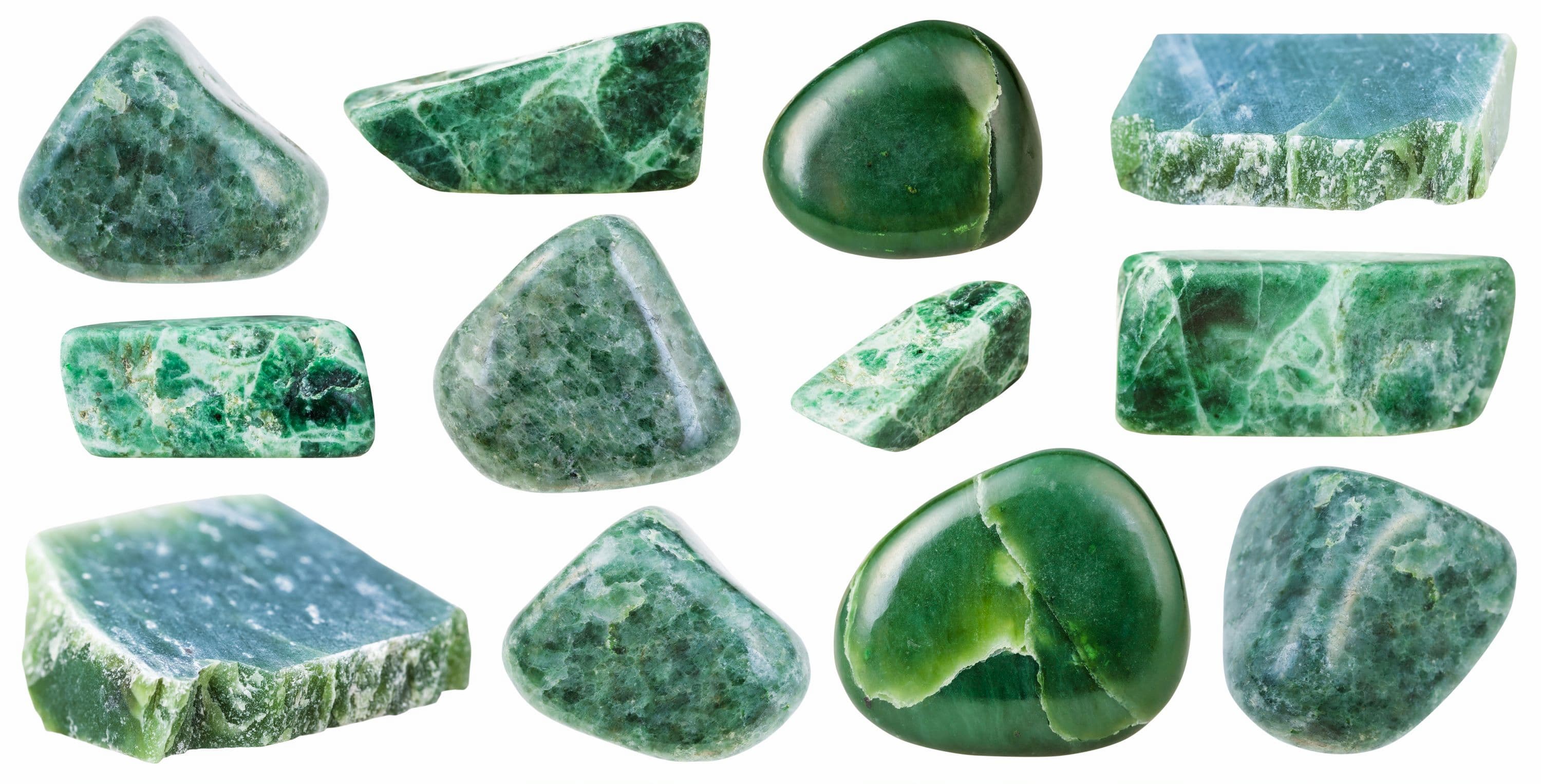 The History of Jade Across the Globe

Jade has played a significant role in many cultures since the Paleolithic period, also known as the Old Stone Age. In the millennia since, this fantastic stone has come to occupy an important place in our collective human history.

In Mesoamerica, the Olmec, Aztec, and Maya considered jade more valuable than gold and used it in their art, jewelry, and religious practices. Ancient Egyptians regarded jade as a symbol of love, inner peace, and harmony. In the Pacific, the Māori used this robust stone to create tools and weapons. Other cultures have also employed jade to form vases and other works of art. 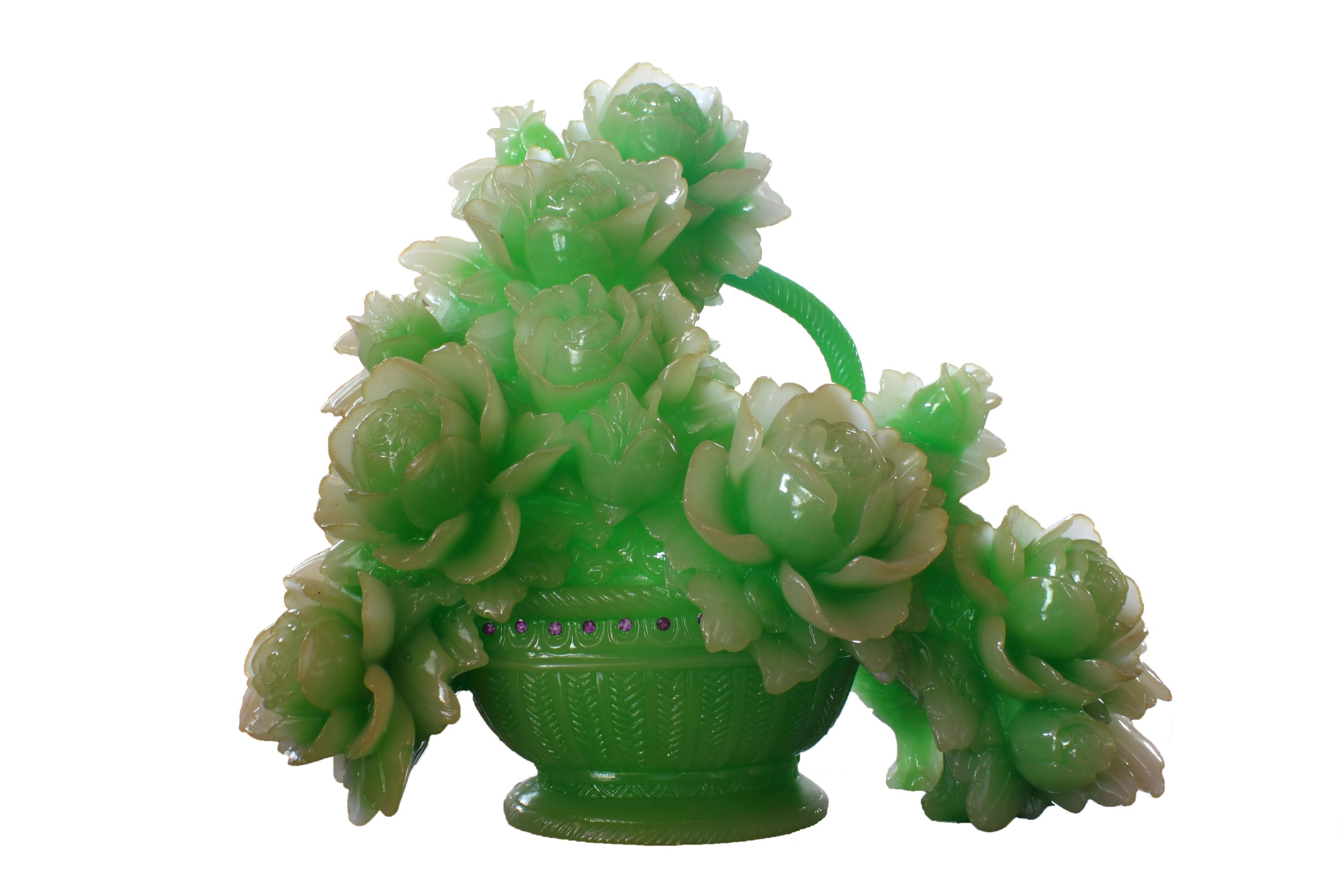 However, jade has probably had the most long-lasting impact on China. China’s history with jade dates back to around the 7th millennium BC. Due to its large mineral deposits, the country quickly developed into a true jade culture.

This precious stone has made an indelible mark on Chinese art, philosophy, ethics, and mythology. Today, it’s often seen as the symbol of this great nation. 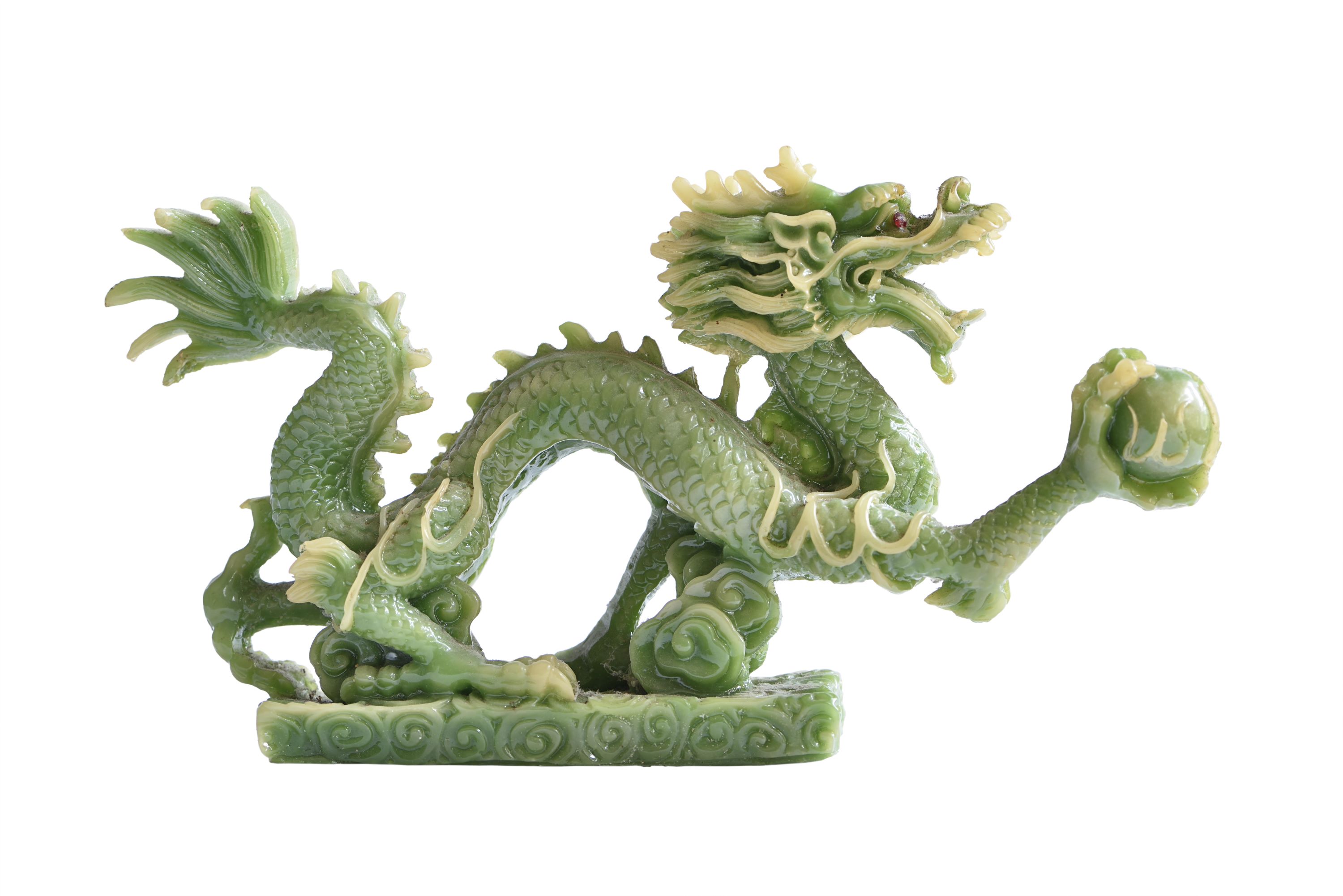 Where does jade occur in nature?

Jade forms within metamorphic rocks under immense pressure or heat in the Earth’s crust. This usually occurs in subduction zones where two continental plates meet. Most jade is recovered either as blocks in mines or from within surface boulders. Today, Myanmar is the world’s foremost source of new jadeite. 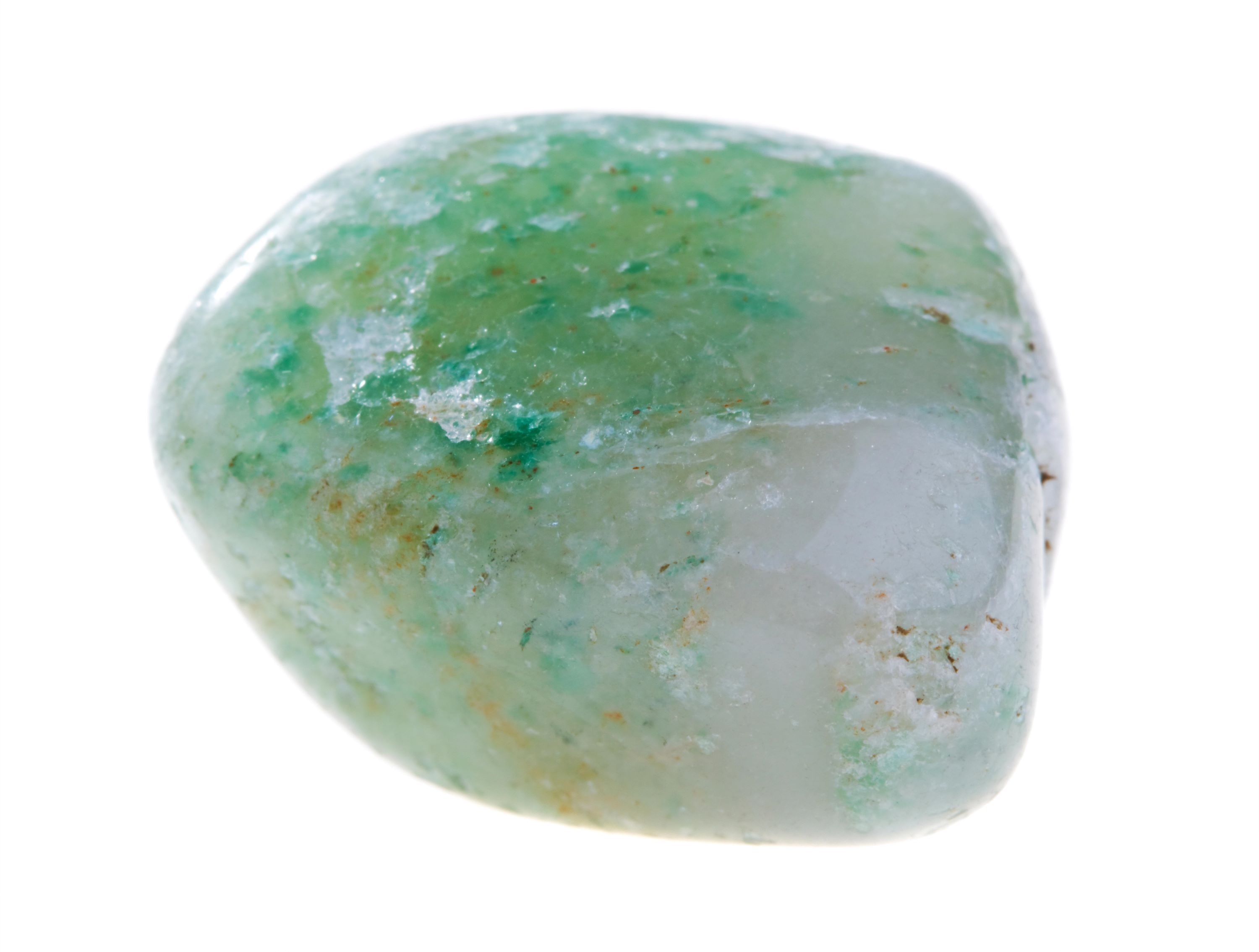 The Properties of Jade

Jade has many interesting properties. Today, we process and cut jade using diamond, making it one of the world’s toughest and most resilient materials. Despite this, its surface feels rather silky and has a soft-looking exterior.

Even though jade only scores between 6 and 7 on the Mohs scale of mineral hardness, its toughness makes it rather difficult to work with. This is why most jewelry makers shape jade into simpler shapes like beads or cabochons (oval stones with a flat bottom). 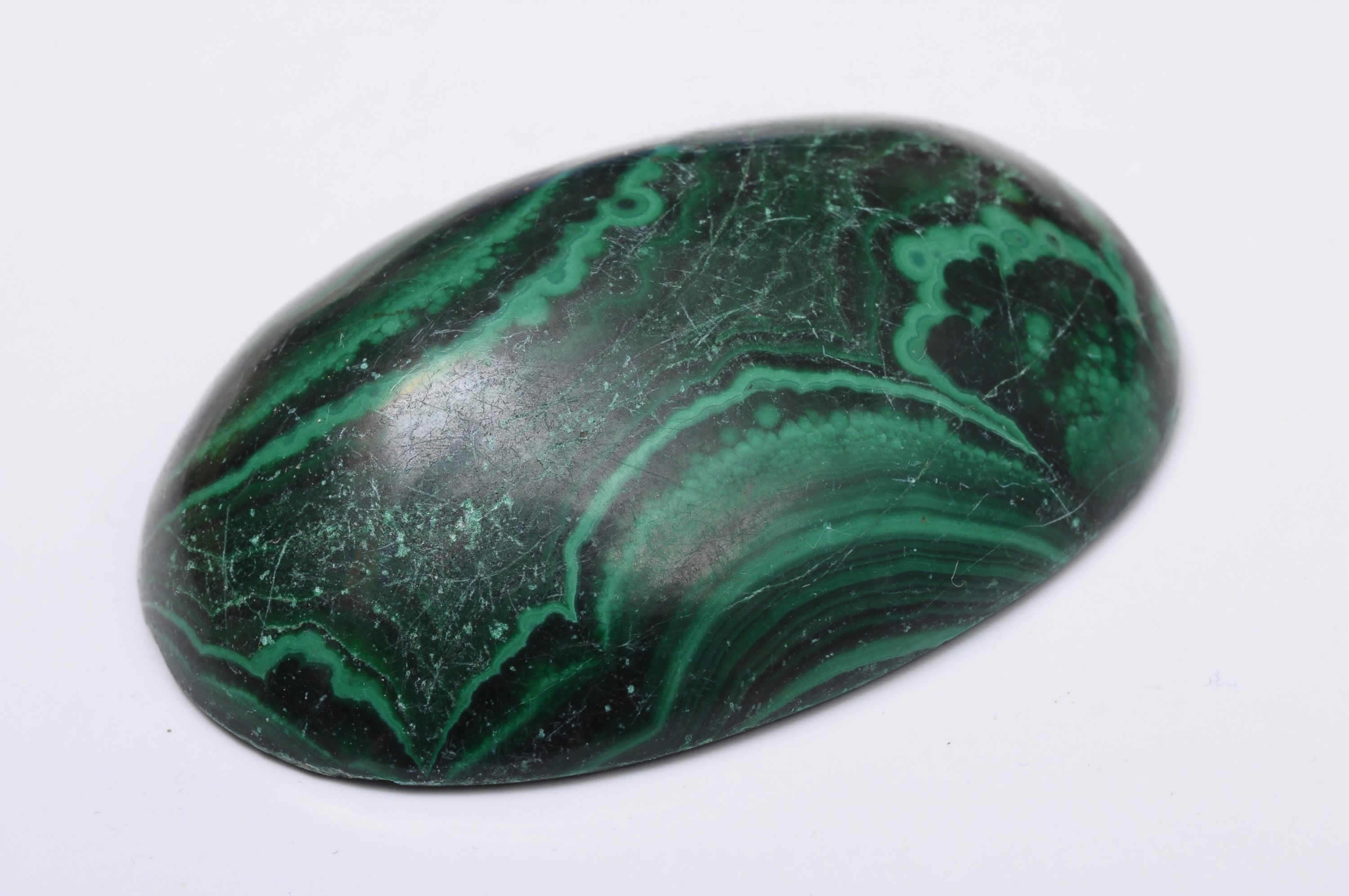 What is the chemical composition of jade?

“Jade” is a general term used to refer to two different minerals: jadeite and nephrite. Jadeite is a robust pyroxene mineral that contains large amounts of sodium and aluminum. Its harder sister mineral, nephrite, is a variety of the amphibole minerals tremolite or actinolite. 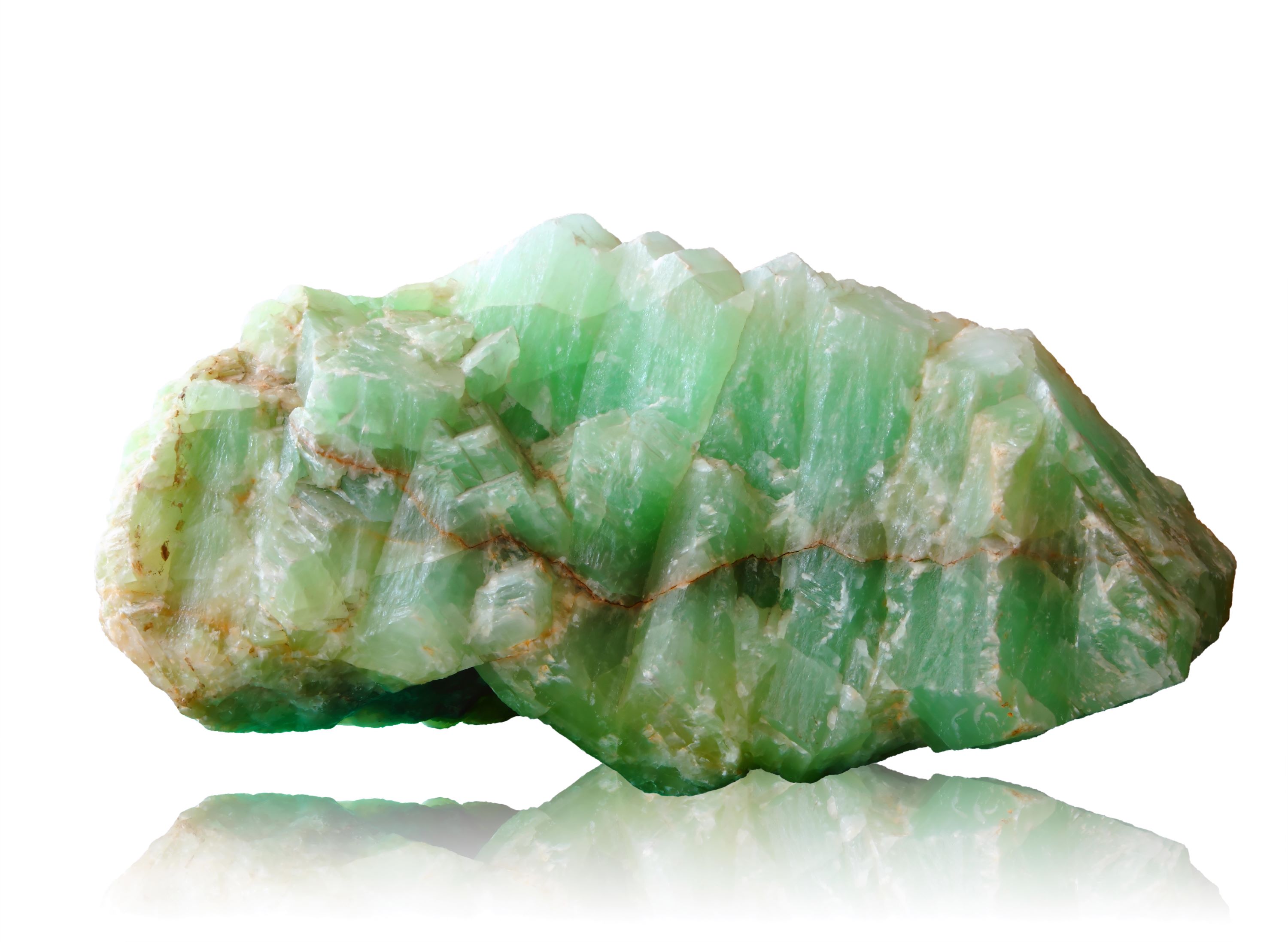 The Many Faces of Jade

Beyond their chemistry, jadeite and nephrite also differ in color. Jadeite comes in a wide variety of hues, including blue, brown, gray, lavender, cream, orange, red, violet, white and yellow. A single stone can include several hues.

The various nuanced shades of green are the most popular, with emerald green jade being particularly highly coveted.

There are seven traditional names representing the various shades of green jadeite. In the US, the most popular shades are emerald, spinach, and apple. However, not every culture prefers the green variety. Pure white and light yellow are the colors of choice in the Far East. Lavender jadeite is also popular and is available with small black specks.

Many jade stones have veins, flecks, or stripes. However, instead of being seen as flaws, these features are valuable and make every stone truly unique.

Unlike jadeite, nephrite is rather limited in its color options. It naturally occurs in brown, green, gray, yellow, and white. That being said, most of these stones are mottled or have red, yellow, or brown stripes – a result of oxidation. 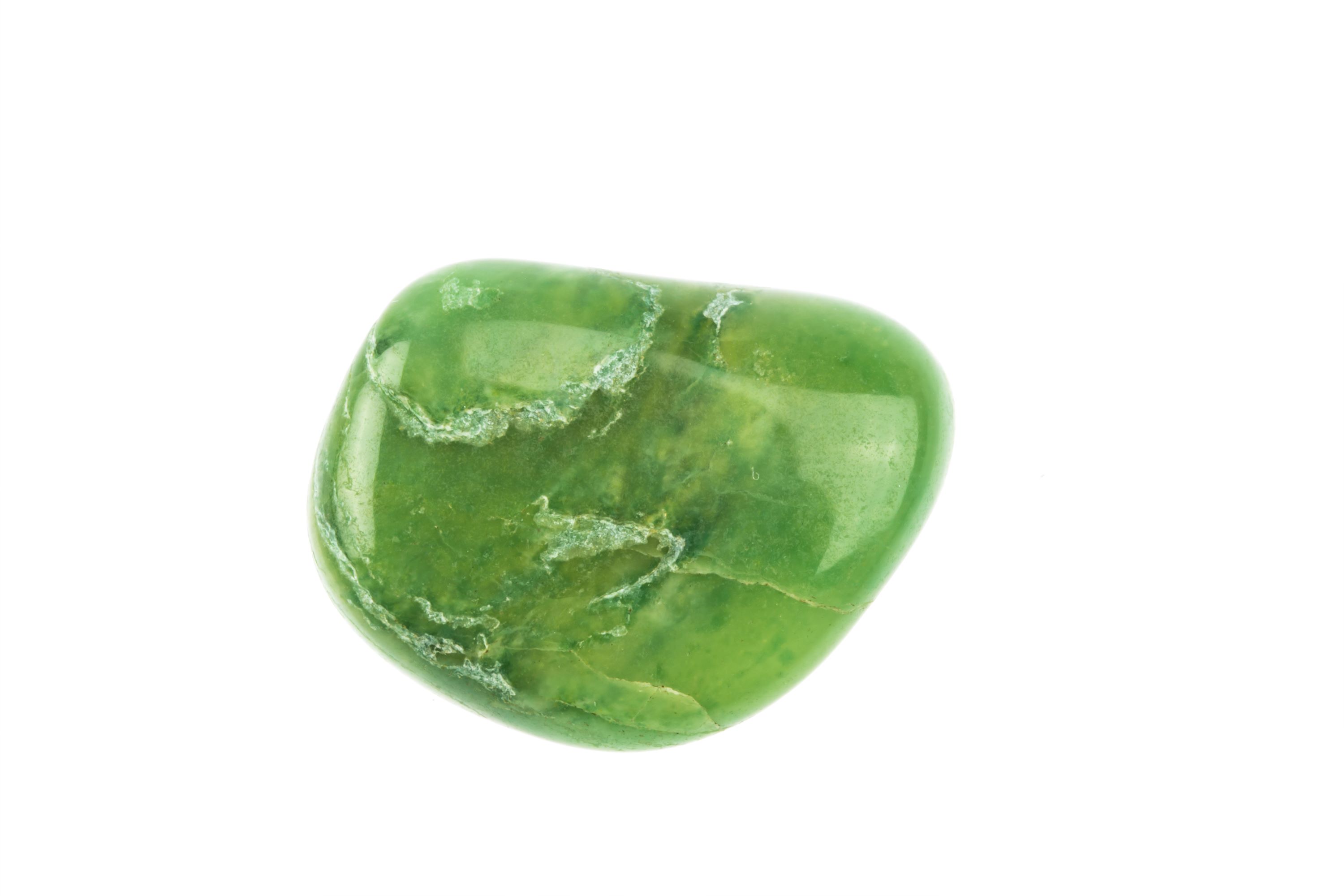 How much does jade cost?

Imperial jade is the most highly coveted and expensive of all jade types. In fact, it’s about as valuable as gold. There is no upper price limit on jewelry made with this fascinating stone.

The value of an individual piece of jade largely depends on its color and whether it’s jadeite or nephrite. Many people create imitation nephrite, which has a negative effect on the price of natural nephrite. On the other hand, jewelry with richly colored, smooth jadeite stones is much more exclusive.

One of the most famous pieces of jadeite jewelry is the “Doubly Fortunate Necklace.” This necklace boasts 27 flawless jade beads, each with optimal color, tone, and saturation. Christie’s auctioned off this impressive treasure for $9.3 million in 1997, making it the world’s most expensive piece of jadeite jewelry. 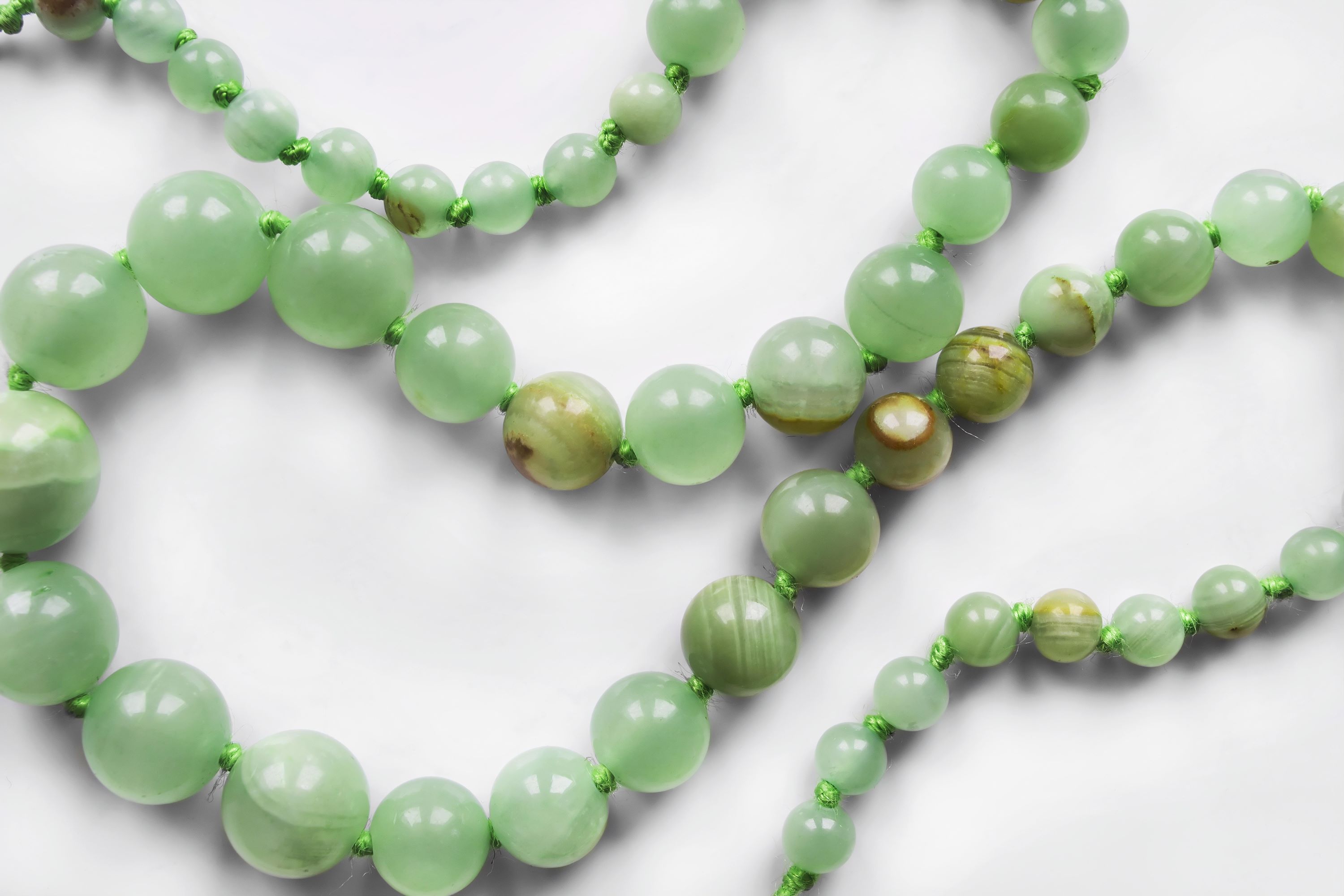 Jade as a Healing Crystal

Jade is a truly legendary gemstone. Many cultures attribute magical qualities to it, which is why it is found in many graves and used to protect against evil spirits. For example, Mesoamericans often offered jade to their gods. Across the Pacific Ocean, jade remains a common good luck charm in China.

Some people extol jade for its healing properties. It’s said to embody the virtues of wisdom, justice, compassion, modesty, and courage, as well as grant long life or even immortality. What’s more, it’s claimed to spread a love of life, joy, and open-mindedness and provide inner peace. However, jade is still primarily used to treat loin and kidney ailments.

What’s more, jade is an important stone for the zodiac signs Cancer and Libra. It gives people born under the sign of Cancer more security and confidence, while Libras experience inner harmony and vitality. Jade is also an important companion stone of the astrological signs Aquarius, Virgo, and Scorpio. Finally, married couples celebrate their jade anniversary after 12 years of marriage. 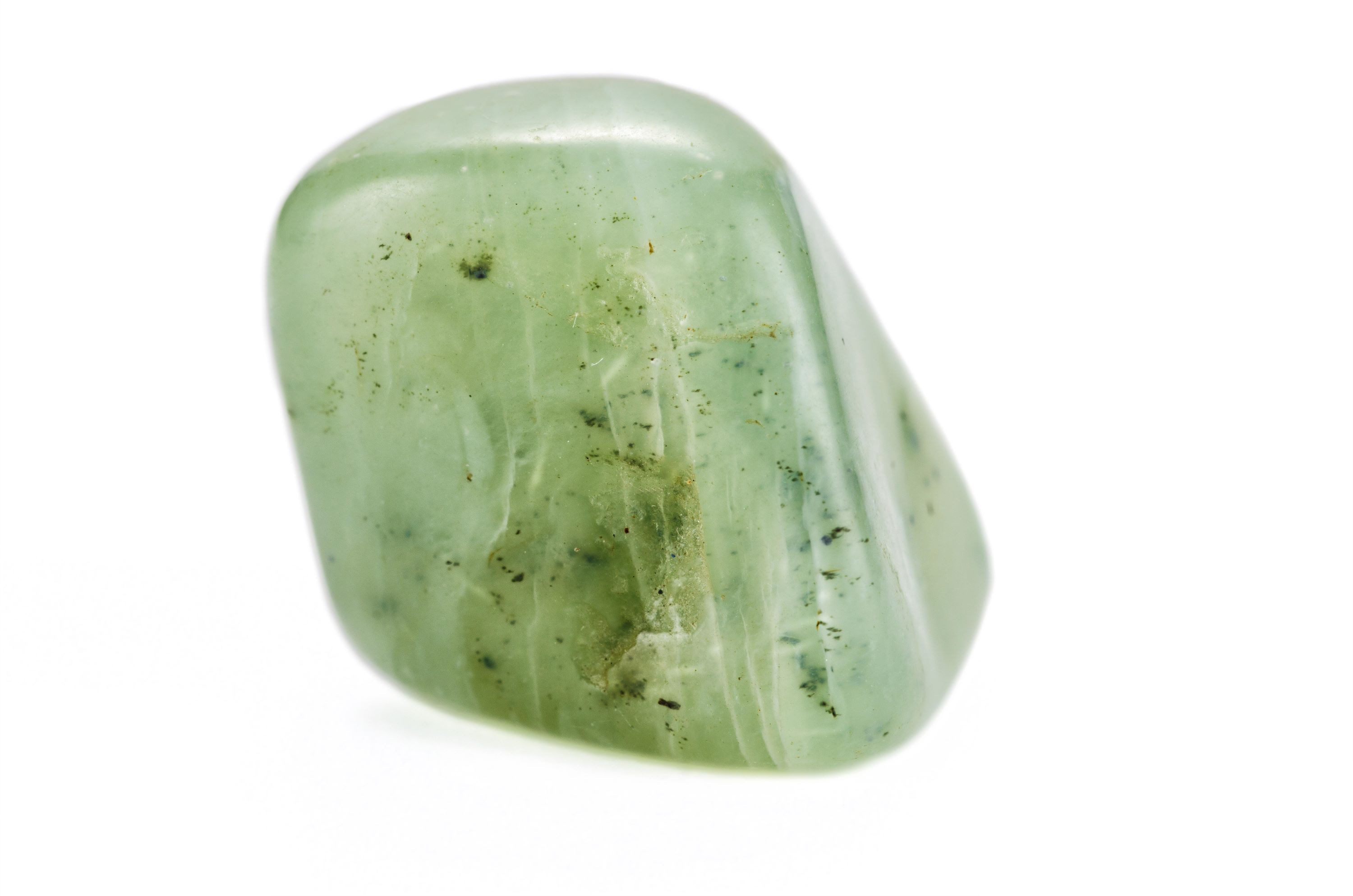 Jade is a popular stone that turns simple pieces of jewelry into something special.

With such a large variety of stones, the range of jade jewelry is truly immense. There are magnificent jade rings made of precious metals, beautiful earrings in different shades of green, and unique bracelets in stunning hues. You’ll find these and many more fantastic jadeite-studded pieces on our online marketplace, FineJewels24. Discover the sparkling world of this imperial gem and find your next piece of jade jewelry! 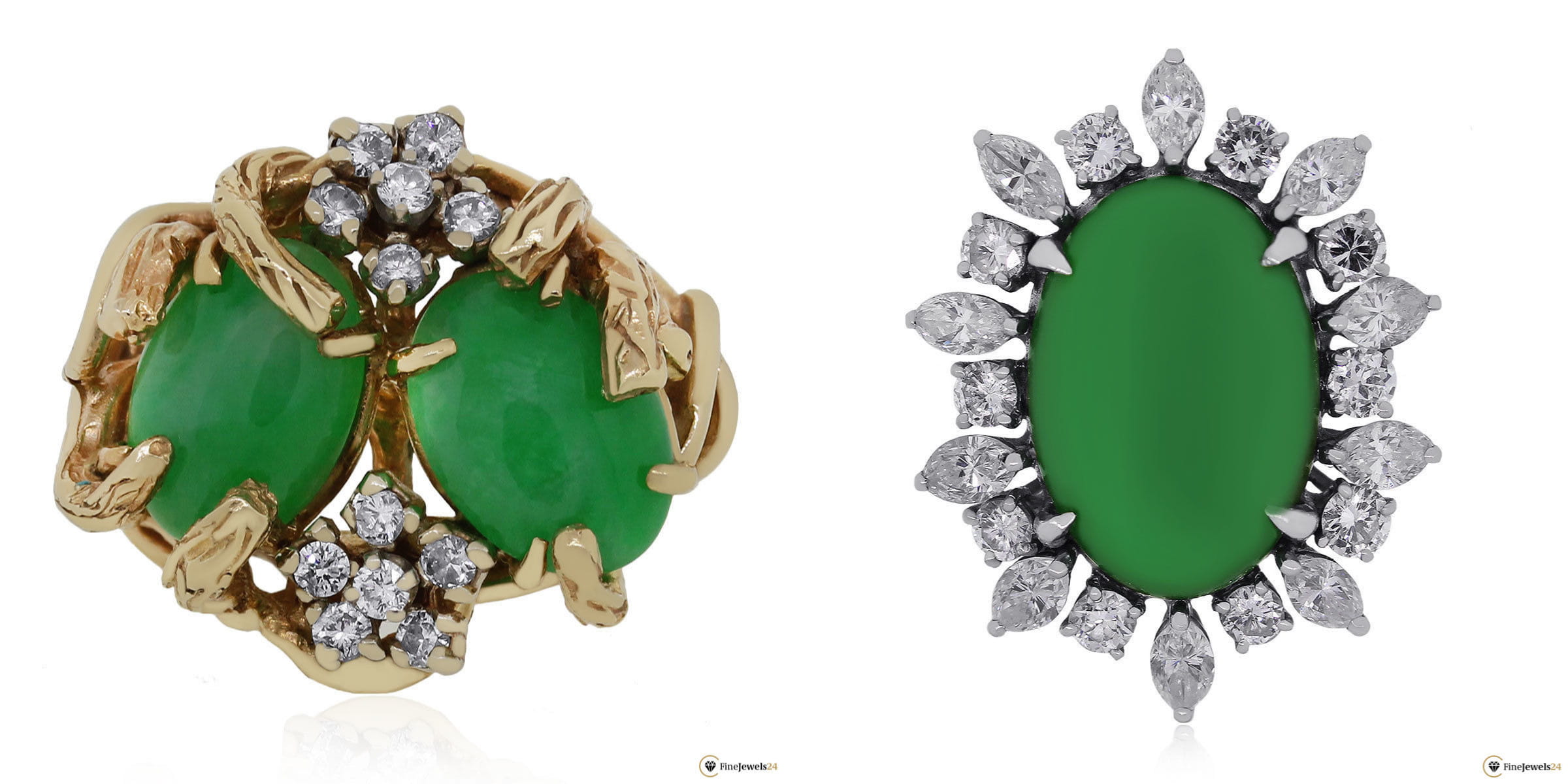 Also visit our encyclopedia to learn more about other precious stones like sapphires and emeralds!