Rubies are the most valuable of all colored gemstones and even rarer than diamonds. The fiery red of this fantastic stone represents passion and romance and sets many hearts ablaze. Read on to learn more about this enchanting jewel!

The Etymology of Ruby

The modern word “ruby” has its roots in the Latin term rubeus, meaning “red.” Over time, this evolved into Middle Latin rubinus. It would later enter the English language in the Middle Ages via Old French rubi.

Until the early 19th century, all red gemstones were grouped together as carbuncles. The term “carbuncle” comes from Latin carbunculus, which translates to “small coal.” This is because these fiery red stones resemble the color of glowing embers.

Where are rubies found in nature?

There are major ruby deposits throughout Myanmar (Burma), particularly in the Mogok Valley, the Mong Hsu region, and Namya. Rubies from Mong Hsu in northeastern Myanmar are especially highly coveted due to their classic red hue and extraordinary clarity.

Other important sources are located in Sri Lanka, Thailand, Cambodia, Madagascar, India, Vietnam, and Tanzania. You can usually tell the origin of an individual ruby based on its inclusions.

Rubies are most commonly found in metamorphic or igneous rocks, as well as in stream sediments. In sediments, these stones can be sifted out from gravel by hand. 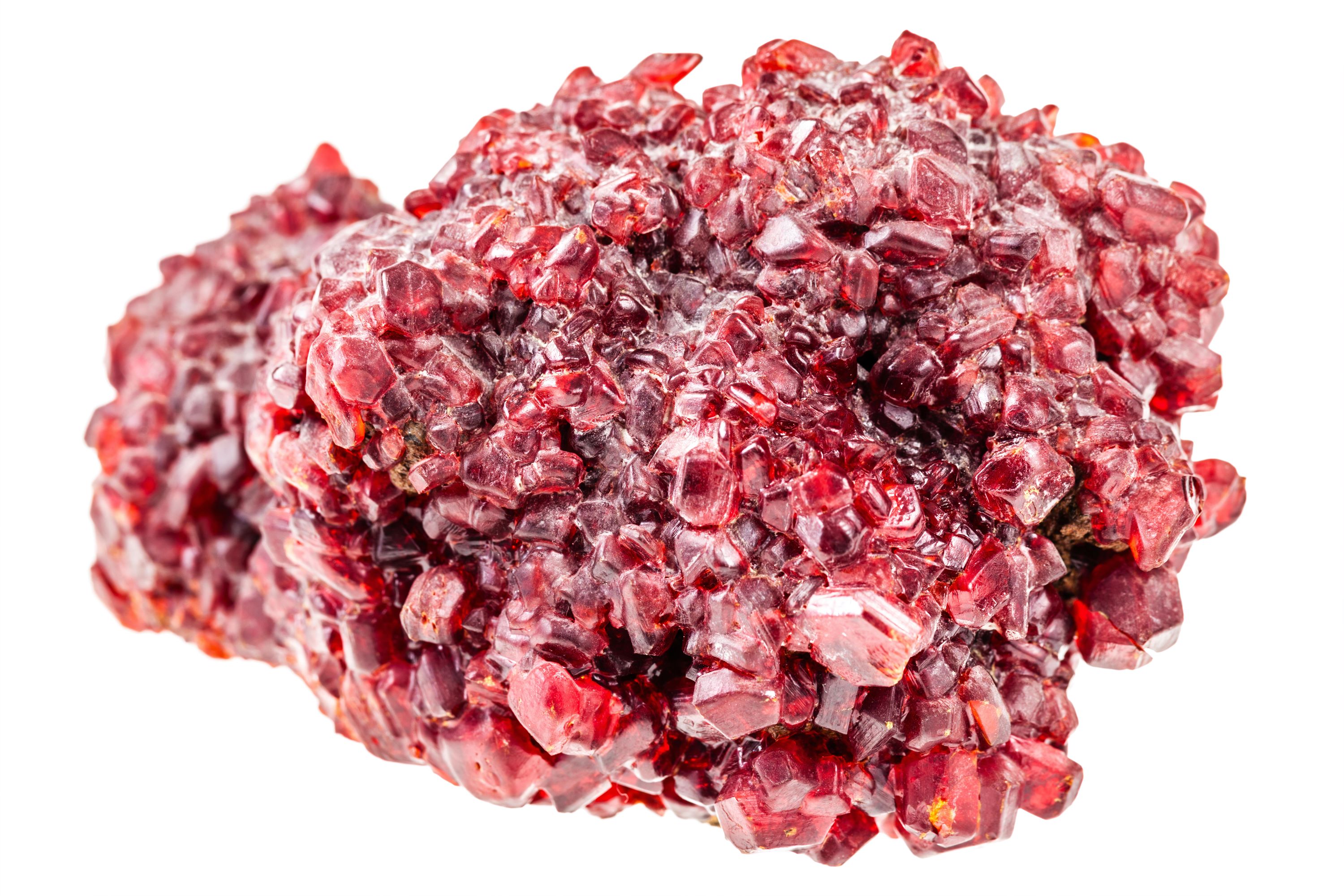 The History of this Royal Gem

Rubies have been captivating humans since long before The Wizard of Oz and Dorothy’s famous ruby red slippers. The ancient Sanskrit word for ruby translates literally to “the king of gems.” There are also multiple references to this stunning stone in the Old Testament.

Ancient Egyptians, Greeks, and Romans prayed to rubies and considered them important talismans. They believed that these red jewels could predict the future and would darken when danger was near. In ancient India, rubies represented an eternal flame and were thought to bring long life.

Today, many collectors still consider rubies the only stone to embody the powers of all gems.

The fact that rubies and sapphires are the same mineral wasn’t discovered until the early 1800s. This was also when distinctions were first properly drawn between rubies, spinels, and garnets. 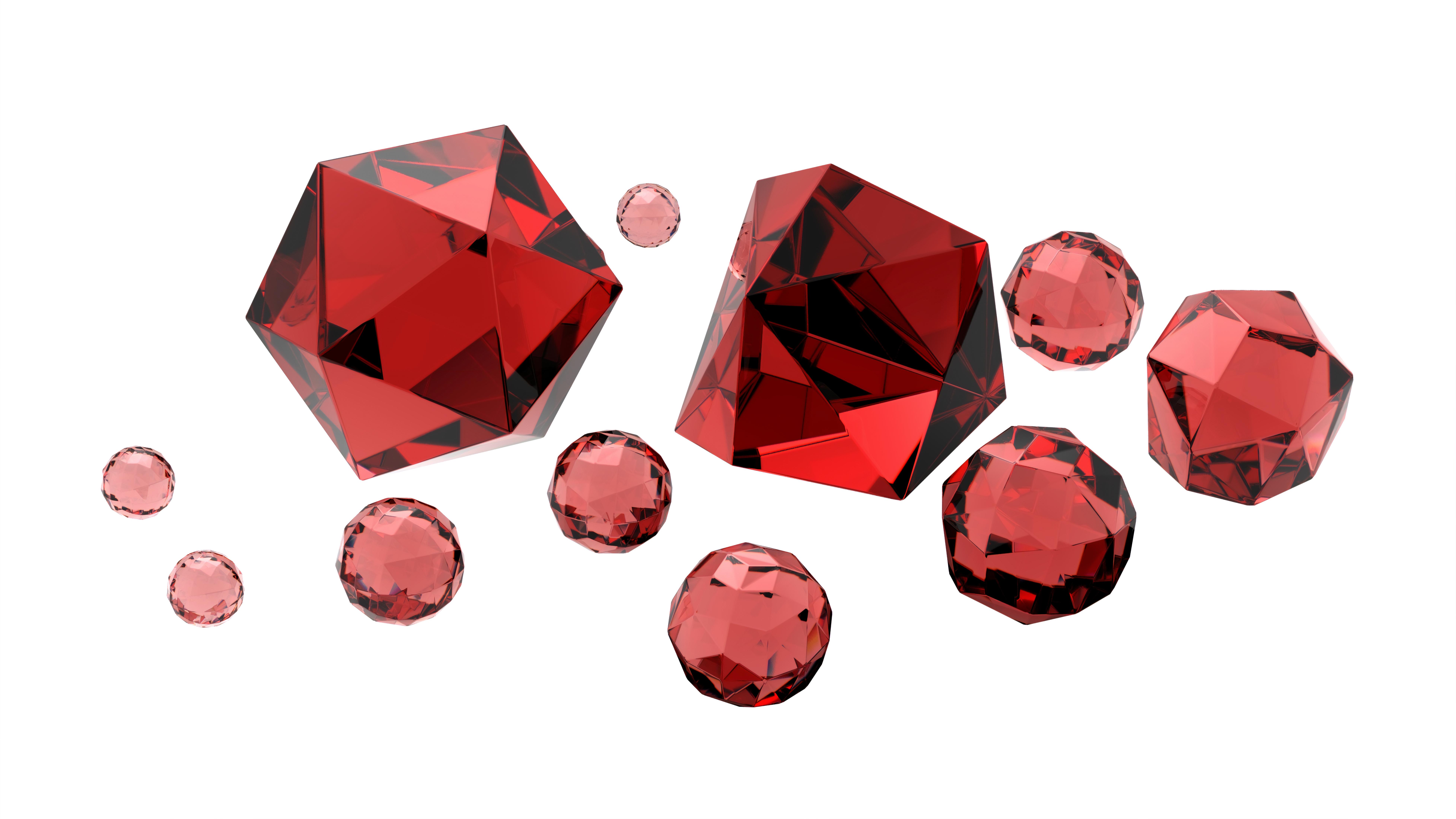 What makes a good ruby?

Color plays a major role in determining the value of a ruby. Rubies cover a wide range of red tones, from light to dark. Some stones have a brown tinge due to the presence of excess iron.

The ideal shade is so-called “pigeon’s blood red,” a rich red hue with a slight touch of purple. Such gems are, by far, the most valuable. Other tones, such as purplish-red or orange-red, demand significantly lower prices.

Many stones are heat-treated to improve their color and clarity. This intensifies the color and can break down inclusions.

Rubies have a glassy to diamond-like shine and look best under natural or white light. With a rating of 9 on the Mohs scale of mineral hardness, these stones are the second-hardest mineral, trailing only diamond.

The ruby is a variety of the mineral corundum. Corundum – or crystalline aluminum oxide – gets its color from foreign elements. It only takes a very small amount of another element to cause a gem to change color.

Rubies receive their red color from the element chromium. While chromium usually results in green stones, ionization causes these jewels to turn red.

Did you know that the term “ruby” refers exclusively to red corundum? All other colored corundum stones are called sapphires! 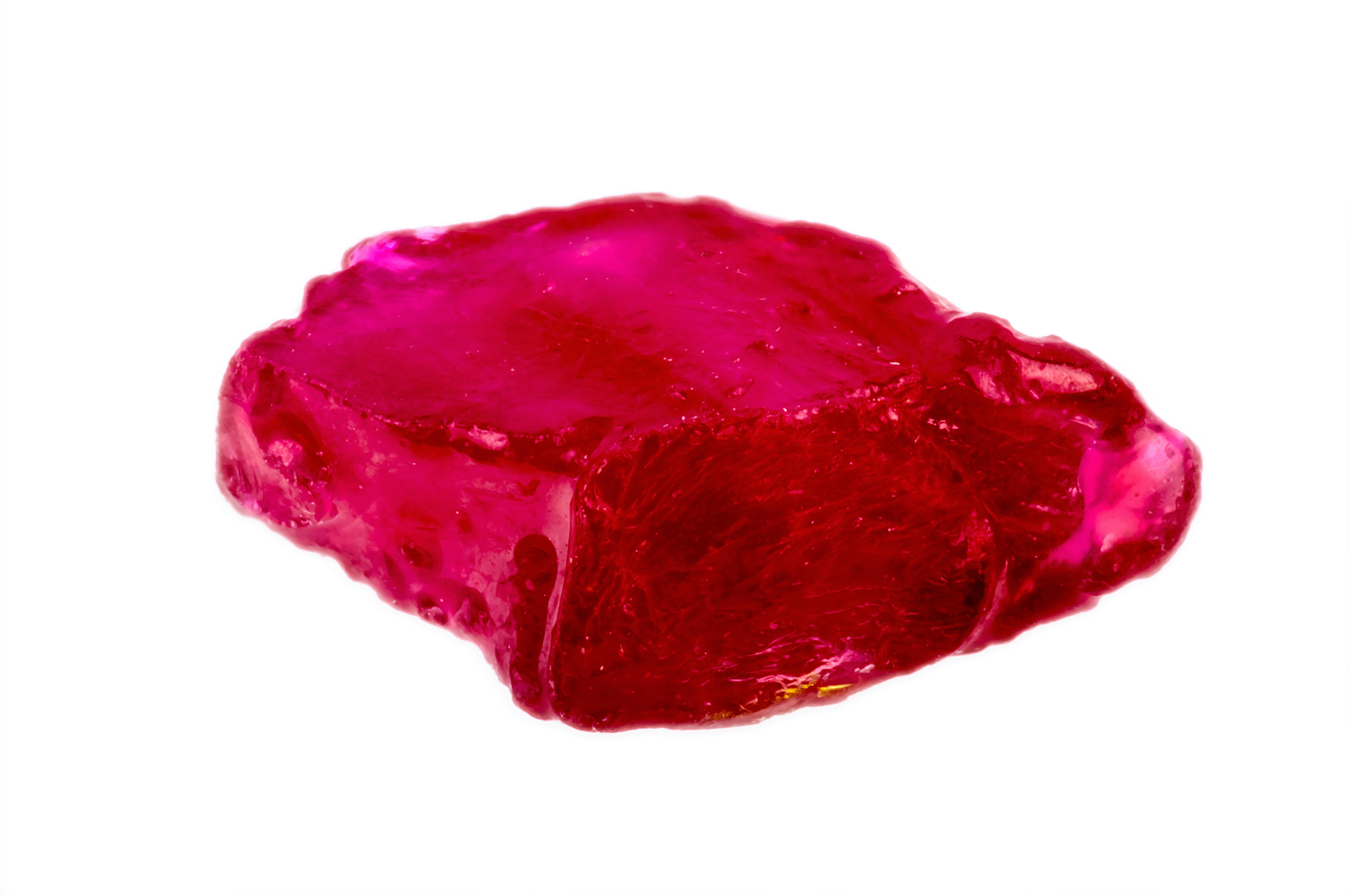 Rutile needle inclusions enhance a ruby’s elegance. Rutile is a mineral that can cause different optical effects based on its configuration.

A small number of rutile needles running parallel to each other lends rubies a silky shine. The more needle inclusions, the less clear the stone. When the needles run parallel to the ruby’s crystal axes, they reflect the light to form a vertical “cat’s eye” slit. These stones are also known as chatoyant rubies.

Another special variety is the star ruby. These rubies get their unique star pattern from an effect called “asterism.” This refers to any time at least two inclusions cross paths within the ruby. The most famous star rubies have six rays. However, there are also four, twelve, and 24-ray star rubies on the market.

How much do rubies cost?

Rubies are among the world’s rarest and most exclusive gemstones. Untreated rubies with the right tone and no inclusions are especially rare and sell for astronomical prices. Depending on the clarity, a one-karat ruby can cost anywhere from several hundred to several thousand dollars. 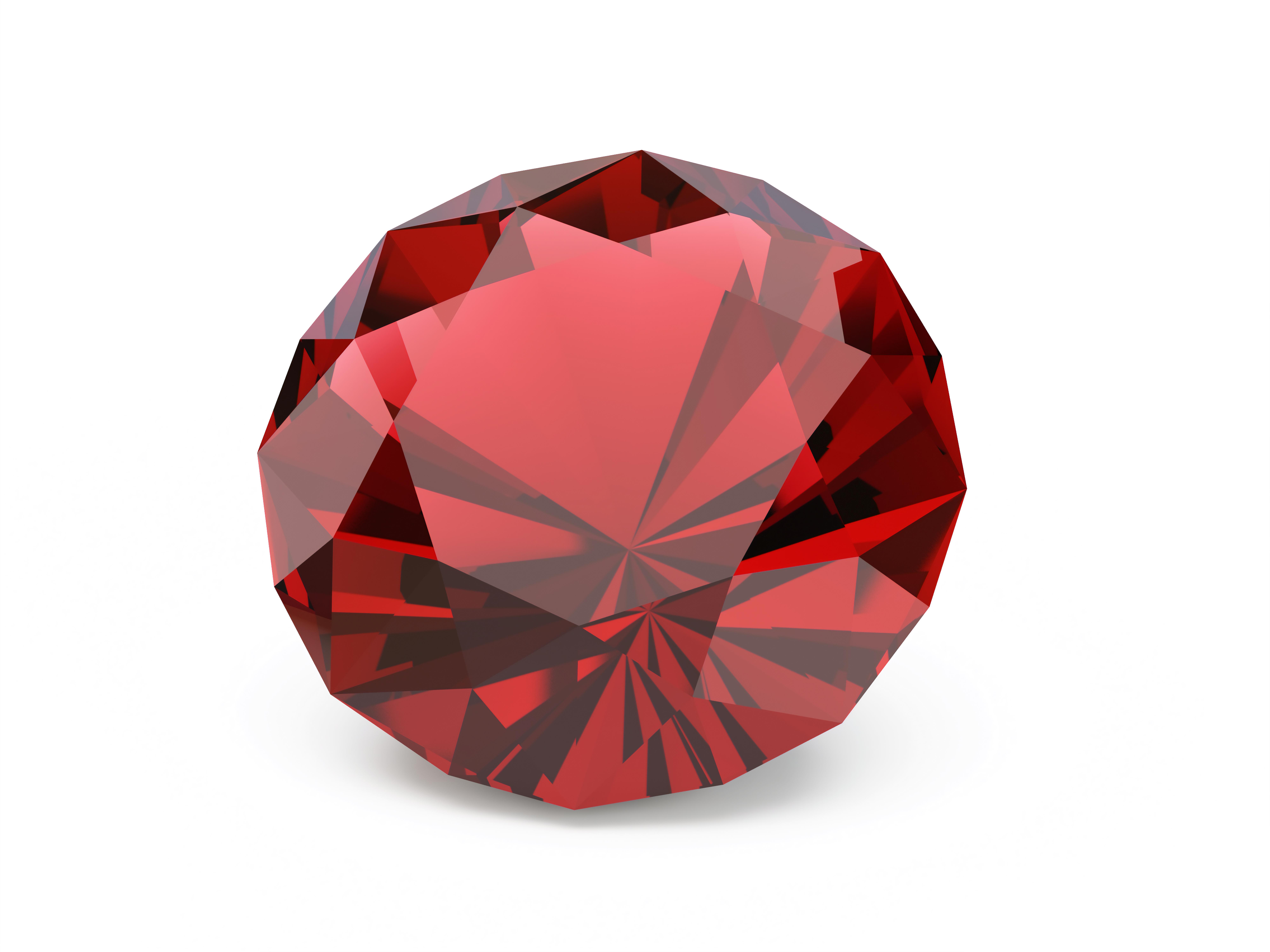 The ruby is the July birthstone. It’s also supposed to bring luck in love and romance. Couples celebrate their ruby anniversary after 40 years of marriage.

Rubies are also famous for their connection to the astrological sign Aries. They are said to help people born under this sign achieve their goals, as well as foster creativity.

In alternative medicine, rubies are believed to have a positive effect on one’s vitality and resolve. Some even claim that these stones bring their wearer’s power and respect from others.

Other purported healing powers include the treatment of headaches and fevers, as well as kidney, spleen, and heart ailments. Rubies are also thought to combat varicose veins and low blood pressure. Finally, these red stones are alleged to ward off evil and offer protection during pregnancy and menopause.

Rubies are often mistaken for other red gems, including spinels and garnets. Synthetic rubies or even stained glass can also be hard to distinguish from the real thing to the untrained eye.

However, each red gemstone has unique properties that help tell them apart. For example, tourmalines are more birefringent than rubies and are rarely red in color. What’s more, they score an 8 on the Mohs scale of mineral hardness.

Since natural stones are so valuable, imitation rubies are extremely common. Always be on high alert when buying rubies!

Our online marketplace, FineJewels24, is home to a wide array of elegant and fascinating ruby jewelry. Browse our listings and discover the brilliant world of this stunning gem!

Visit our encyclopedia to learn more about other precious stones like emeralds and sapphires!